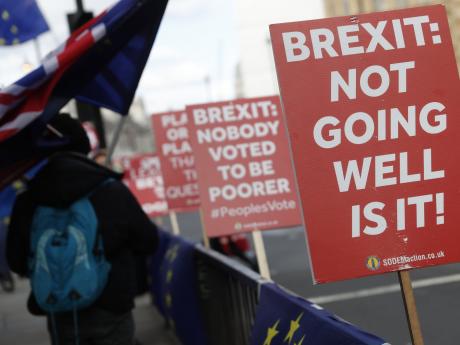 LONDON (AP) — British Prime Minister Theresa May refused to admit defeat for her European Union divorce deal Monday, despite deadlocked talks with the bloc a day before Parliament is scheduled to reconsider the plan it has already rejected once before.

The House of Commons is scheduled to decide Tuesday whether to approve the withdrawal agreement it resoundingly voted down in January. There are few signs of a big shift in opinion since then, with lawmakers still split over whether to leave the EU, and if so on what terms.

The EU, meanwhile, is frustrated at what it sees as the inability of Britain’s weak and divided government to lay out a clear vision for Brexit — and because May is seeking changes to an agreement she helped negotiate.

European Commission spokesman Margaritis Schinas said Monday the EU was “open and willing” to hold talks with the U.K. but “no further meetings at (a) political level are scheduled.”

“It is now for the House of Commons to take an important set of decisions this week,” Schinas said.

May’s spokesman, James Slack, said “talks are ongoing” among lower-level negotiators and there was “a shared determination by both sides to find a solution.”

The British leader has spoken by phone to eight EU national leaders since Friday, including French President Emmanuel Macron and German Chancellor Angela Merkel, without any sign of a breakthrough.