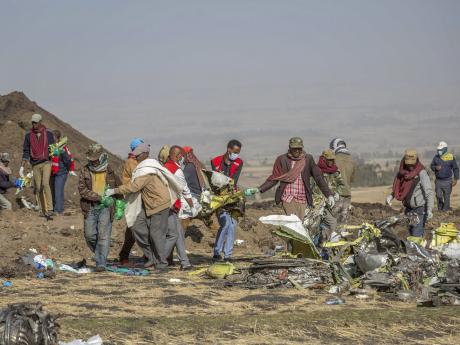 HEJERE, Ethiopia (AP) — Britain joined a growing number of countries grounding a new Boeing plane involved in the Ethiopian Airlines disaster as a global team of investigators began picking through the rural crash site on Tuesday.

Some airlines cited worried customers for grounding the Boeing 737 Max 8, as experts chased details on why the plane crashed shortly after takeoff Sunday, killing all 157 on board.

Ethiopian Airlines had issued no new updates on the crash as of late afternoon as families around the world waited for answers. Some insights into the disaster and its cause could take months, aviation experts said.

Oman, Norwegian Air Shuttle and South Korean airline Eastar Jet also were the latest to halt use of the Boeing 373 Max 8. Malaysia, Australia and Singapore suspended all flights into or out of their countries.

The U.S.-based Boeing, however, has said it has no reason to pull the popular aircraft from the skies, and it does not intend to issue new recommendations about the aircraft to customers. Its technical team joined American, Israeli, United Arab Emirates, Kenyan and other aviation experts in the investigation led by Ethiopian authorities.

The U.S. Federal Aviation Administration said it expects Boeing will soon complete improvements to an automated anti-stall system suspected of contributing to the deadly crash of another new Boeing 737 Max 8 in October and update training requirements and related flight crew manuals.

Safety experts have cautioned against drawing too many comparisons too soon with that Lion Air crash of the same model that killed 189 people in Indonesia.

The Ethiopian Airlines plane crashed in clear weather six minutes after taking off for Nairobi.