3 story building collapses in Nigeria with children inside 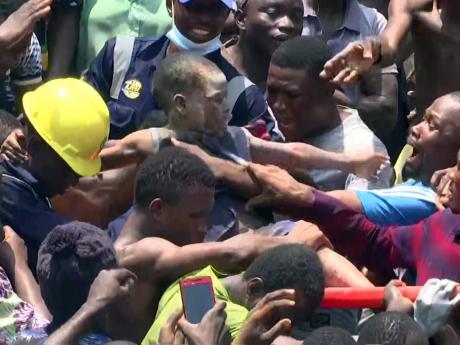 LAGOS, Nigeria (AP) — Frantic rescue efforts were underway in Nigeria on Wednesday after a three-story school building collapsed while classes were in session, with scores of children thought to be inside.

Witnesses said nearly a dozen students had been pulled from the ruins, but it was not yet clear if any were dead.

Associated Press video from the scene showed a few dust-covered children carried from the rubble, to cheers.

But the crowd quieted as other children were pulled out and slung over rescuers’ shoulders, limp and dangling.

Onlookers crowded around in the densely populated neighbourhood in Lagos, Nigeria’s commercial capital and a city of some 20 million people.

It was not known how many students had been in a primary school located on the building’s top floor.

Some witnesses estimated as many as 100 children.

It is not immediately clear what caused the structure to collapse.

Hundreds of people stood in narrow streets and on rooftops of rusted, corrugated metal.

A single yellow excavator scooped at the ruins, a nest of rebar and dust.

Emotional, a number of shirtless men jumped in to offer assistance, hacksaws and mallets in hand.

One held a water bottle in his teeth.