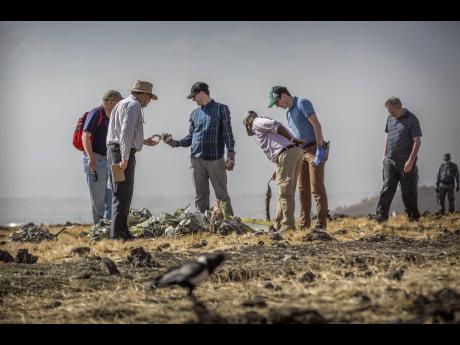 AP
Foreign investigators examine wreckage yesterday at the scene where the Ethiopian Airlines Boeing 737 Max 8 crashed shortly after takeoff on Sunday killing all 157 on board, near Bishoftu, or Debre Zeit, south of Addis Ababa, in Ethiopia. (AP Photo/Mulugeta Ayene)

Britain, France and Germany yesterday joined a rapidly growing number of countries grounding a new Boeing plane involved in the Ethiopian Airlines disaster or turning it back from their airspace, while investigators in Ethiopia looked for parallels with a similar crash just five months ago.

Pressure grew on the United States to take action over the Boeing 737 Max 8 as Asian, Middle Eastern and then European nations and carriers gave in to concerns. Some cited customers frightened by the sight of Sunday’s crash in clear weather that killed all 157 people on board.

Ethiopian Airlines had issued no new updates on the crash as of nightfall as 35 countries that lost citizens waited for answers. Some insights into the disaster and its cause could take months, aviation experts said.

Turkish Airlines, Oman, Norwegian Air Shuttle and South Korean airline Eastar Jet were among the latest to halt use of the Boeing model. Ireland, the Netherlands, Malaysia, Australia and Singapore suspended all flights into or out of their countries.

Already, some were turning the planes away. A Turkish Airlines official said two Britain-bound planes returned to Istanbul after British airspace was closed to the aircraft. The official spoke on condition of anonymity because he was not authorised to speak publicly.

The US-based Boeing, however, has said it has no reason to pull the popular aircraft from the skies. It does not intend to issue new recommendations about the aircraft to customers. Its technical team joined American, Israeli, United Arab Emirates, Kenyan and other aviation experts in the investigation led by Ethiopian authorities.

The Federal Aviation Administration said it expects Boeing would soon complete improvements to an automated anti-stall system suspected of contributing to the deadly crash of another new Boeing 737 Max 8 in October.

Some US airlines expressed support for the Boeing model, and American Airlines and Southwest continued flying them. A vice-president for American, the world’s biggest carrier that has 24 Max 8s, said they had “full confidence in the aircraft”.