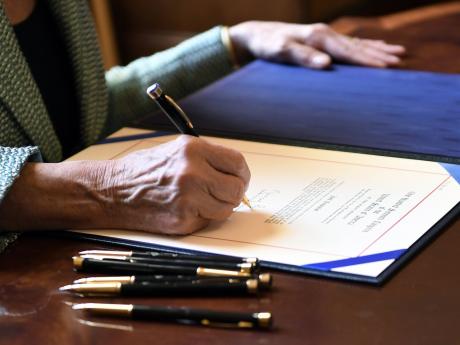 WASHINGTON (AP) — The Republican-run Senate firmly rejected President Donald Trump’s declaration of a national emergency at the southwest border on Thursday, setting up a veto fight and dealing him a conspicuous rebuke as he tested how boldly he could ignore Congress in pursuit of his highest-profile goal.

The Senate voted 59-41 to cancel Trump’s February proclamation of a border emergency, which he invoked to spend $3.6 billion more for border barriers than Congress had approved.

Twelve Republicans joined Democrats in defying Trump in a showdown many GOP senators had hoped to avoid because he commands die-hard loyalty from millions of conservative voters who could punish defecting lawmakers in next year’s elections.

With the Democratic-controlled House’s approval of the same resolution last month, Senate passage sends it to Trump.

He has shown no reluctance to casting his first veto to advance his campaign exhortation, “Build the Wall,” which has prompted roars at countless Trump rallies.

Approval votes in both the Senate and House fell short of the two-thirds majorities that would be needed for an override to succeed.