UK lawmakers gear up for vote on Brexit delay request 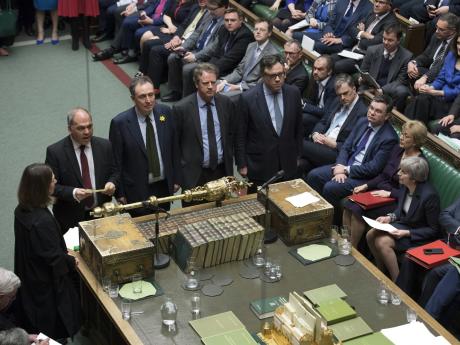 LONDON (AP) — British lawmakers faced another tumultuous day Thursday, as Parliament prepared to vote on whether to request a delay to the country’s scheduled departure from the European Union and Prime Minister Theresa May struggled to shore up her shattered authority.

A new round of Brexit tussles came a day after chaotic scenes in the House of Commons, when lawmakers voted to rule out leaving the EU without an agreement on divorce terms. A dozen government ministers abstained rather than support May’s bid to preserve the no-deal option, while another voted against, and resigned.

Lawmakers were deciding Thursday whether to seek a delay to Brexit, currently due to take place on March 29.

May grudgingly granted the vote after Parliament twice rejected her EU divorce deal. Despite the rebuffs, May has signalled she will try a third time to get backing for the agreement next week.

May’s opponents are simultaneously trying to grab the Brexit controls from her hands, although it’s far from clear if Britain’s divided Parliament can agree on a way forward.

Britain is currently scheduled to leave the EU in 15 days, when a two-year countdown to departure runs out.

Exiting the EU without a deal could mean major disruptions for businesses and people in the U.K. and the 27 remaining countries.