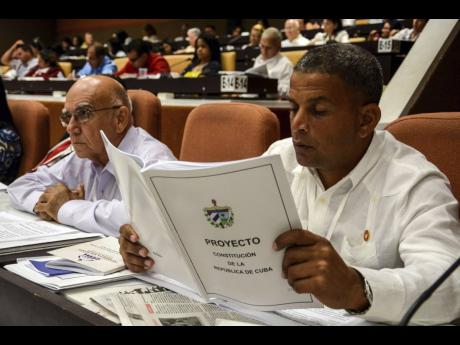 AP
In this July 21, 2018 photo, a member of the National Assembly studies the proposed constitutional update in Havana, Cuba.

In the midst of a regional crisis over Venezuela and tough economic straits, the Cuban government is about to launch a sweeping makeover of its centrally planned, single-party system with dozens of new laws that could reshape everything from criminal justice to the market economy.

Nearly a year of debate and discussion ended last month with the approval of Cuba’s first constitutional reform since 1976. Some observers see the new constitution as a mere cosmetic update aimed at assuring one of the world’s last communist systems won’t get another revamp until long after the passing of its founding fathers, now in their late 80s and early 90s. Others see the potential for a slow-moving but deep set of changes that will speed the modernisation of Cuba’s economically stagnant authoritarian bureaucracy.

Cuban legal experts told The Associated Press that they expect the government to send the National Assembly between 60 and 80 new laws over the next two years to replace ones rendered obsolete by the new constitution. The assembly is virtually certain to unanimously approve all government proposals, as it has for decades.

“I expect to see big changes in Cuba with the new constitution,” said Julio Antonio Fernandez, a constitutional law professor at the University of Havana. “A new state structure, a transformed political system, led by the Communist Party, of course, but different and confronting big challenges.”

One of the first changes will be in Cuba’s political system. Within five months, the government is required to pass a new electoral law that splits the roles of head of state and government between the current president and the new post of prime minister.

A new set of governors will replace the Communist Party first secretaries as the highest official in Cuba’s 15 provinces.

While the Communist Party remains the only permitted political group, the wording of the new constitution could allow voters to choose between various candidates rather than simply voting yes or no for a candidate pre-selected by a government commission, experts said.