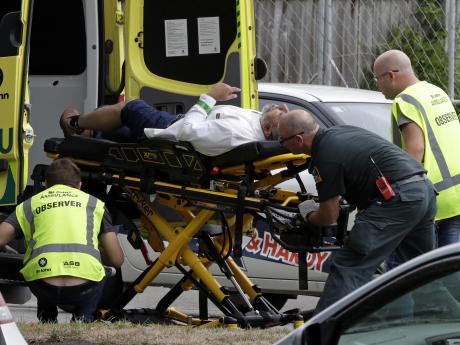 CHRISTCHURCH, New Zealand (AP) — At least 49 people were killed in mass shootings at two mosques full of worshippers attending Friday prayers on what the prime minister called “one of New Zealand’s darkest days.”

One man was arrested and charged with murder in what appeared to be a carefully planned racist attack. Police also defused explosive devices in a car.

Two other armed suspects were being held in custody. Police said they were trying to determine how they might be involved.

Prime Minister Jacinda Ardern said the events in Christchurch represented “an extraordinary and unprecedented act of violence,” and that many of the victims could be migrants or refugees.

“It is clear that this can now only be described as a terrorist attack,” Ardern said.

In addition to the dead, health officials said 48 people were being treated at Christchurch Hospital for gunshot wounds.

Injuries ranged from minor to critical.

Police took three men and a woman into custody after the shootings, which shocked people across the nation of 5 million people.

Police later said one of the arrests didn’t relate to the shootings.