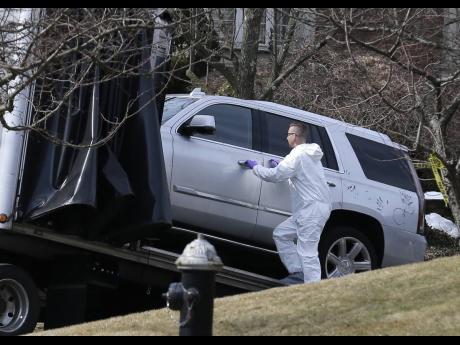 AP
Crime scene investigators load a car that appears to have been checked for fingerprints on to a flatbed truck in the Staten Island borough of New York yesterday. Francesco ‘Franky Boy’ Cali was found with multiple gunshot wounds at his red-brick, colonial-style house on Staten Island on Wednesday night and was pronounced dead at a hospital.

The reputed boss of New York’s Gambino crime family was gunned down outside his home, dying a virtual unknown compared with his swaggering 1980s-era predecessor, the custom-tailored tabloid regular John Gotti.

Francesco ‘Franky Boy’ Cali, 53, was found with multiple gunshot wounds at his red-brick, colonial-style house on Staten Island on Wednesday night and was pronounced dead at a hospital.

No immediate arrests were made.

Federal prosecutors had referred to Cali in court filings in recent years as the underboss of the Gambino organisation. News accounts since 2015 said he had ascended to the top spot.

The Gambino family was once among the most powerful criminal organisations in the US, but federal prosecutions in the 1980s and 1990s sent Gotti and other top leaders to prison, diminishing its reach.

The last Mafia boss to be shot to death in New York City was Gambino don Paul Castellano, assassinated outside a Manhattan steakhouse in 1985 at the direction of Gotti, who then took over.

Cali kept a much lower profile than Gotti.

With his expensive double-breasted suits and overcoats and silvery swept-back hair, Gotti became known as the Dapper Don, his smiling face all over the tabloids. As prosecutors tried and failed to bring him down, he came to be called the Teflon Don.

In 1992, Gotti was convicted in Castellano’s murder and a multitude of other crimes. He was sentenced to life in prison and died of cancer in 2002.

Cali’s only mob-related criminal conviction came a decade ago, when he pleaded guilty in an extortion scheme involving a failed attempt to build a NASCAR track on Staten Island. He was sentenced to 16 months behind bars and was released in 2009.