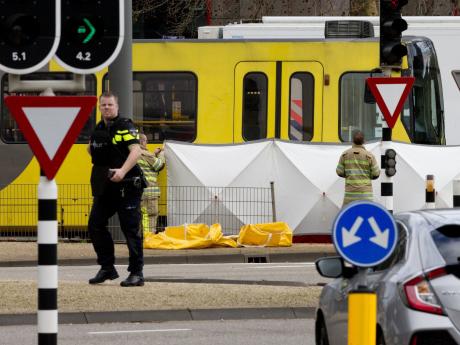 UTRECHT, Netherlands (AP) — Dutch police were hunting down a suspect after a shooting Monday on a tram in the central Dutch city of Utrecht that left one person dead and multiple people injured.

Authorities immediately raised the terror alert for the area to the maximum level and said they are considering the possibility of a “terrorist motive” in the attack.

Dutch military police went on extra alert at Dutch airports and at key buildings in the country as the Utrecht manhunt took place.

A few hours after the shooting, Utrecht police released a photo of a 37-year-old man born in Turkey who they said was “associated with the incident.”

The photo showed a bearded man on board a tram, dressed in a dark blue hooded top.

Police warned citizens not to approach the man, whom they identified as Gokman Tanis, but call authorities instead.

Police, including heavily armed officers, flooded the area after the shooting Monday morning on a tram at a busy traffic intersection in a residential neighbourhood.

They later erected a white tent over an area where a body appeared to be lying next to the tram. Authorities didn’t say exactly how many people were injured.