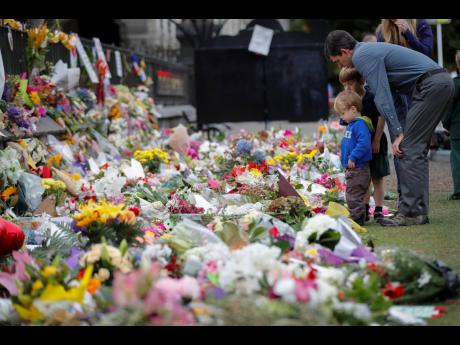 Vincent Thian
Mourners lay flowers on a wall at the Botanical Gardens in Christchurch, New Zealand. A steady stream of mourners paid tribute at a makeshift memorial to the 50 people slain by a gunman at two mosques in Christchurch.

A steady stream of mourners paid tribute yesterday at a makeshift memorial to the 50 people slain by a gunman at two mosques in Christchurch, while dozens of Muslims stood by to bury the dead when authorities finally release the victims’ bodies.

Hundreds of flowers were piled up amid candles, balloons and notes of grief and love outside the Al Noor mosque. As a light rain fell, people clutched each other and wept quietly.

Two days after Friday’s attack, New Zealand’s deadliest shooting in modern history, relatives were still waiting for authorities to release the bodies. Islamic law calls for bodies to be cleansed and buried as soon as possible after death, usually within 24 hours.

Supporters arrived from across the country to help with the burials in Christchurch, and authorities sent in backhoes to dig graves at a site that was newly fenced off and blocked from view with white netting.

“We have to be absolutely clear on the cause of death and confirm their identity before that can happen,” Bush added. “But we are also aware of the cultural and religious needs. So we are doing that as quickly and as sensitively as possible.”

Police said they had released a preliminary list of the victims to families, which has helped give closure to some who were waiting for any news.

The suspect in the shootings, 28-year-old white supremacist Brenton Harrison Tarrant, appeared in court Saturday amid strict security, shackled and wearing all-white prison garb, and showed no emotion when the judge read one murder charge and said more would likely follow.

Tarrant had posted a jumbled 74-page anti-immigrant manifesto online before the attacks and apparently used a helmet-mounted camera to broadcast live video of the slaughter.

Ardern said the gunman had sent the manifesto to her office email about nine minutes before the attacks, although she hadn’t gotten the email directly herself. She said her office was one of about 30 recipients and had forwarded the email to parliamentary security within a couple of minutes of receiving it.

Bush said at a news conference that another body had been found at Al Noor mosque as they finished removing the victims, bringing the number of people killed there to 42. Another seven people were killed at Linwood mosque and one more person died later at Christchurch Hospital.

Thirty-four wounded remained at the hospital, where officials said 12 were in critical condition. A four-year-old girl at a children’s hospital in Auckland was also listed as critical.