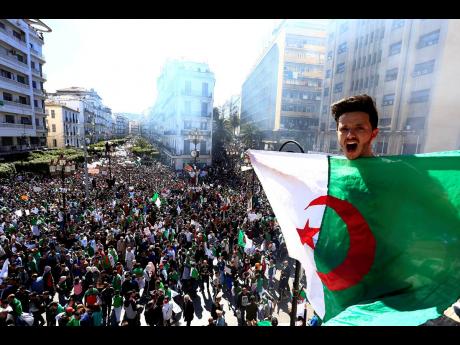 The Associated Press
An Algerian shouts as he holds the national flag during a protest in Algiers, Algeria, on Friday, March 15.

Bedoui was appointed last week as part of a government overhaul aimed at appeasing protesters, and he promised to create a new Cabinet within days to respond to the demands of Algeria’s demonstrating youth.

But protesters weren’t appeased and demonstrations persisted for a fourth consecutive Friday as hundreds of thousands of people of all ages marched through Algeria’s capital and other cities to press for an end to Bouteflika’s 20-year rule. They accuse 82-year-old Bouteflika of flouting the constitution by indefinitely delaying April’s elections in a desperate bid to cling to power.

Meziane Meriane, a union official from the country’s education sector, declined a meeting with Bouteflika-loyalist Bedoui because her representatives don’t want to be part of a government that is “condemned by the people”.

“We are with the street demanding change, but this prime minister, who was interior minister in the outgoing government, does not correspond to the break demanded by the people,” Meriane said.

The state doctors’ union boss, Lyes Merabet, also declined on Sunday a meeting on discussions over the creation of the new government.

“We are for a total break,” Merabet said on Monday.

A week ago, Bouteflika responded to the unprecedented street protests by cancelling the presidential elections and withdrawing his bid to seek a fifth term. But demonstrators have demanded the government quit at the technical end of its mandate in April, along with the president who has rarely been seen since a 2013 stroke.

“Top officials don’t want to go against the people’s will by sitting on a government that should leave office on April 29 — the date that President Bouteflika’s term ends,” said the Associate Press Abdelaziz Rahabi, former ambassador of Algeria in Madrid and current professor at Sciences Po University. “The country is experiencing a major political crisis.”