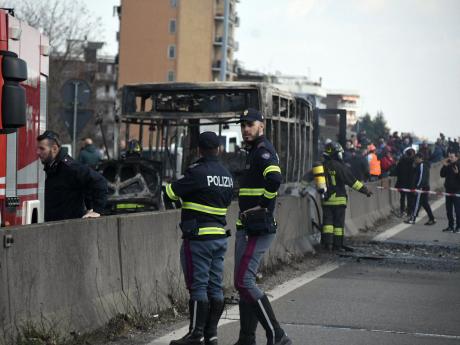 Firefighters and police officers stand by the gutted remains of a bus in San Donato Milanese, near Milan, Italy, March 21, 2019. (Daniele Bennati/ANSA via AP)

MILAN (AP) — A bus driver in northern Italy abducted 51 children and their school chaperones Wednesday, threatening the hostages’ lives for 40 minutes and setting the bus on fire at a Carabinieri blockade.

Officers from the national police force broke windows at the back of the bus to reach the passengers and got all of them out without serious injuries before flames destroyed the vehicle, authorities said.

The driver was apprehended and treated for burns. Prosecutors described him as a 47-year-old Italian citizen of Senegalese origin and said he told authorities he wanted to vindicate Europe-bound migrants who have died in the Mediterranean Sea but did not plan to hurt anyone.

However, prosecutors said the suspect, identified as Ousseynou Sy, made preparations that showed his actions were premediated, such as buying a canister of gasoline and restraints on Tuesday.

He also sent a video to friends in Italy and Senegal indicating plans for a bold action and with the message, “Africa, Rise up,” they said.

Sy was being investigated on suspicion of kidnapping, intention to commit a massacre, arson and resisting law enforcement, with terrorism as an aggravating circumstance since the event caused panic.