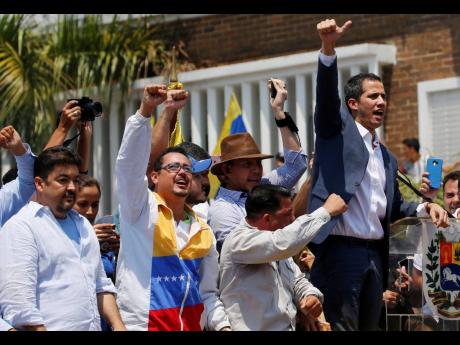 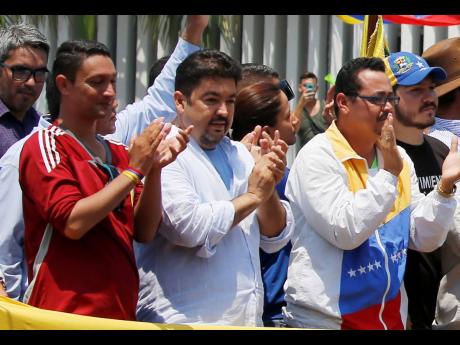 The Associated Press
In this Saturday, March 16, 2019 photo, lawyer Roberto Marrero (centre) applauds upon his arrival to a rally of Venezuelan opposition leader Juan Guaidó, who has declared himself interim president, in Valencia, Venezuela. 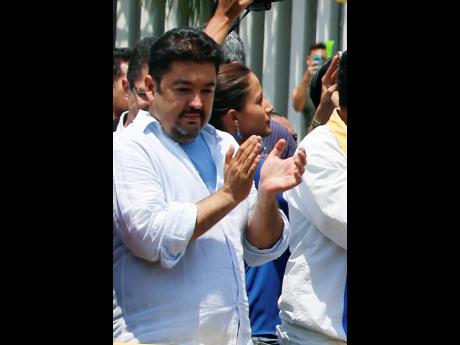 The Associated Press
In this Saturday, March 16, 2019 photo, lawyer Roberto Marrero applauds upon his arrival to a rally of Venezuelan opposition leader Juan Guaido, who has declared himself interim president in Valencia, Venezuela. Venezuelan security forces detained Marrero, a key aide to Guaido in a raid on his home early Thursday, March 21 an opposition lawmaker said. Marrero was taken by intelligence agents in the overnight operation in Caracas. (AP Photo/Fernando Llano)
1
2
3

Masked security forces detained a key aide to Venezuelan opposition leader Juan Guaidó in a raid on his home early yesterday, arriving in a convoy of vehicles and breaking down his door in a show of force that escalated tensions with the United States.

Lawyer Roberto Marrero was taken away by intelligence agents in an overnight operation that was promptly condemned by Guaidó as well as US Secretary of State Mike Pompeo, who called for the immediate release of the opposition figure.

“We will hold accountable those involved,” Pompeo tweeted.

The US has imposed oil sanctions on Venezuela as well as individuals linked to President Nicolás Maduro in an attempt to force him from power. President Donald Trump has said tougher sanctions could occur and that “all options are on the table,” a remark that Maduro and his ally, Russia, have interpreted as a possible prelude to military intervention.

The Venezuelan government had no immediate comment on Marrero’s detention, which represented a sharp increase in police pressure on the opposition after a period of relative calm. Guaidó had even said that the government was ignoring him in an attempt to sap the energy of the opposition, though Maduro has often described his adversary as a “puppet” and a “clown”.

Marrero reported the raid in a telephone call, whose recording circulated on social media soon after the operation occurred. As he described how a large group of intelligence officials was entering his home, heavy thuds could be heard in the background.

The neighbouring home of opposition lawmaker Sergio Vergara was also searched. Vergara said he was woken up by heavy banging at his door and that agents pointed weapons at him.

The security forces broke through a metal screen door and a wooden door to get into Marrero’s house, and left drawers open during their search, said Carlos Berrizbeitia, another opposition lawmaker who later visited the residence. Dozens of security forces were involved.