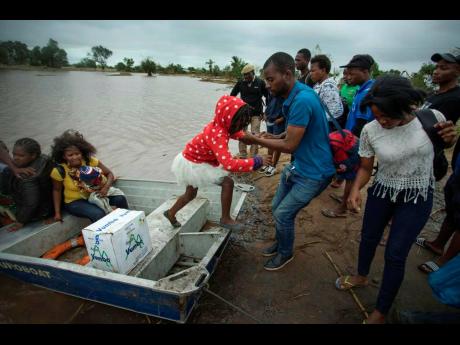 The Associated Press
A young girl is helped from a boat after being evacuated from floodwaters on Wednesday, March 20, following cyclone-force winds and heavy rain near the coastal city of Beira, Mozambique.

The Red Cross says it is sending emergency sanitation and water facilities to the hard-hit Mozambique port of Beira and is appealing for 10 million Swiss francs to help 75,000 of the worst affected people.

Jamie LeSueur, who heads operations in Mozambique for the International Federation of Red Cross and Red Crescent Societies (IFRC), said yesterday that the emergency sanitation and water units “will be crucial” in preventing the spread of water-borne disease.

The IFRC and Mozambique Red Cross are also trying to address the massive need for shelters.

Red Cross volunteers have already distributed emergency shelter kits – comprising tarpaulins and basic tools – to about 1,500 families, and an additional consignment for 3,000 families is scheduled to arrive on Friday, LeSueur said.

At the same time, Portugal is sending an intervention task force to help in the search and rescue of survivors in Mozambique following the devastation caused by Cyclone Idai.

Foreign Minister Augusto Santos Silva says two Portuguese Airforce C130 transport planes were due to depart yesterday to the region. The first one was taking 35 soldiers, medical personnel and a disaster relief team from the National Republican Guard.

At least 200 people have died in Mozambique, a former Portuguese colony in southeast Africa, and 100 more in neighbouring Zimbabwe, as a result of the cyclone over the weekend and widespread flooding that ensued.