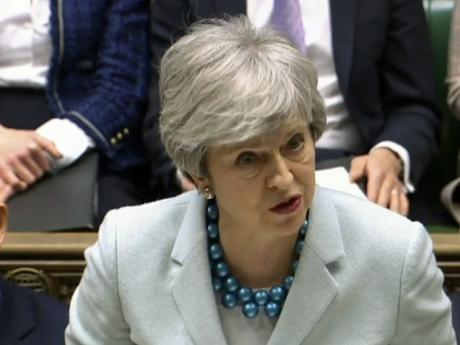 Britain's Prime Minister Theresa May makes a statement on Brexit to lawmakers in the House of Commons, London, Monday, March 25, 2019. (House of Commons via AP)

The House of Commons voted late Monday to wrest the parliamentary timetable away from the government temporarily so that lawmakers can vote on alternatives to the withdrawal agreement May negotiated with the EU.

The government, which usually controls the scheduling of votes in Parliament, said the lawmakers’ move “upends the balance between our democratic institutions and sets a dangerous, unpredictable precedent for the future.”

Votes are due to be held Wednesday on options that could include remaining in the EU’s single market and customs union, calling a new membership referendum and cancelling Brexit.

Health Secretary Matt Hancock told the BBC that the government wouldn't’t “pre-commit” to accepting the option backed by lawmakers because they may come up with a plan that is impractical.

May’s authority is hanging by a thread after 30 members of her Conservative Party defied her instructions and voted for Parliament to take control of the process.

Three government ministers resigned rather than vote with the government.