Dems not giving up on Russia probe; Trump visits Republicans 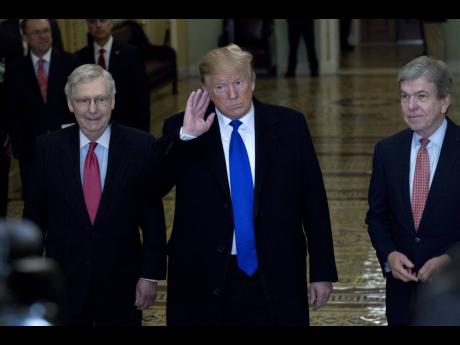 President Donald Trump took a victory lap on Capitol Hill yesterday, emboldened by the end of the government’s Russia probe, even as Democrats demanded the release of special counsel Robert Mueller’s full report and intensified their focus on policy issues.

The Affordable Care Act took centre stage for the Democrats after a season of congressional business that’s been mostly about Trump, including the investigations and, earlier, the government shutdown. Radiating a sense of vindication, Trump walked into the Senate flanked by Republican leaders.

“It could not have been better,” Trump said of the summary of the Mueller report by Attorney General William Barr. But he, too, was quick to turn to policy and the future: “The Republican Party will soon be known as the party of healthcare. You watch!”

House Speaker Nancy Pelosi and other Democratic leaders also pointed to healthcare. She urged rank-and-file Democrats behind closed doors to “be calm” and focus on policy promises that helped propel them to the House majority last fall. That means advocating for a robust policy agenda to improve healthcare and pay while conducting the oversight of the Trump administration many voters want.

“Let’s just get the goods,” Pelosi said, according to an aide in the room granted anonymity to discuss the private caucus meeting.

The advice was reinforced by former President Barack Obama, who counselled freshman Democrats at a reception Monday night.

Obama advised the newly elected lawmakers to listen to constituents and identify issues they feel so strongly about that they’d be willing to lose their House seats in fights over them, according to multiple people at the private party.

The former president recalled that as a state legislator, he gave priority to his constituents, which helped keep his popularity high enough in Illinois that he could advocate for bold policy ideas.

The challenges for Democrats come as Trump has made clear he’s fired up to go on the offensive against those who propelled the narrative that he colluded with Russia to win the 2016 election.

Even before he arrived in the Senate, Trump tweeted his message about healthcare. When he walked into a cloistered parlour to lunch with Republicans, they applauded him.