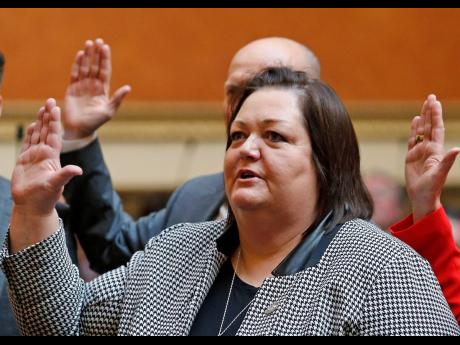 The Associated Press
In this January 28 photo, state Representative Cheryl Acton, R-West Jordan, is sworn in on the House floor at the Utah State Capitol in Salt Lake City.

The Governor of Utah in the United States (US), Gary Herbert, has signed a law banning most abortions after 18 weeks of gestation, setting the stage for a legal showdown.

Though the Republican governor said the measure signed late Monday strikes a balance, opponents said it is unconstitutional and promised to sue. The law is expected to take effect in May.

The American Civil Liberties Union of Utah pointed to the US Supreme Court’s long-time holding that states cannot ban abortion before the foetus is viable outside the womb, usually at about 23 weeks.

The ban adds to a long list of abortion restrictions in Utah, including a 72-hour waiting period and an in-person informed-consent session, Planned Parenthood of Utah said.

“This 18-week ban is clearly unconstitutional and part of a broader agenda to ban abortion one law at a time,” president Karrie Galloway said in a statement.

The law comes as abortion opponents across the country are emboldened by President Donald Trump’s appointment of conservative US Supreme Court justices and seek cases to challenge Roe v Wade, the court’s 1973 ruling that legalised abortion nationwide.

Republican Arkansas Governor Asa Hutchinson has also signed an 18-week ban, and several other states have considered or passed proposals to ban abortion much earlier, once a foetal heartbeat can be found.

In Utah, Herbert’s spokesman, Paul Edwards, said he’s against abortion and believes lawmakers set an appropriate threshold for respecting a woman’s right to choose while “protecting the unborn”.

The measure allows some exceptions, including cases of rape, fatal foetal deformity or serious detriment to the mother’s health.

Herbert has said he is not worried about the potential cost of a lawsuit, estimated at about US$2 million if the state loses.

The sponsor of the measure, Republican Representative Cheryl Acton, has said she sponsored it to reduce the number of second-trimester abortions that “shock the conscience”.

Herbert also signed into law this year a measure banning abortion if the only reason is a foetal diagnosis of Down’s syndrome. The law contains a so-called trigger clause and wouldn’t go into effect unless a similar measure is upheld elsewhere.