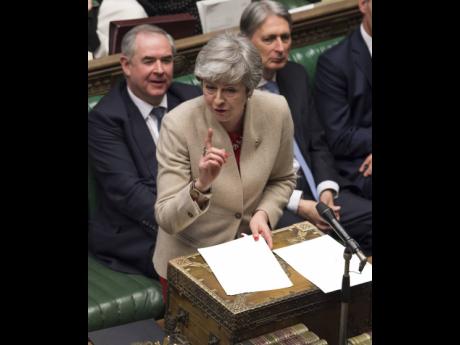 United Kingdom (UK) lawmakers yesterday rejected the government’s divorce agreement with the European Union (EU) for a third time, leaving Britain just two weeks to decide between a long delay to Brexit and an abrupt no-deal departure from the bloc.

The House of Commons voted 286-344 against the withdrawal agreement struck between Prime Minister Theresa May and the EU, rebuffing her plea to “put aside self and party” and “accept the responsibility given to us by the British people” to deliver Brexit.

Amid business warnings that a no-deal Brexit could mean crippling tariffs, border gridlock and shortages of goods, a visibly frustrated May said the vote had “grave” implications.

“The legal default now is that the United Kingdom is due to leave the European Union on 12 April – in just 14 days’ time,” she said. “This is not enough time to agree, legislate for and ratify a deal, and yet, the House has been clear it will not permit leaving without a deal. And so we will have to agree an alternative way forward.”

Had the deal been passed, Britain would have left the EU on May 22.

The EU said the rejection of the divorce terms made a no-deal Brexit “a likely scenario” and called an emergency summit for April 10 to decide what to do next.

An EU Commission official said the 27 remaining EU nations were “fully prepared for a no-deal scenario at midnight 12th of April” – Britain’s deadline to chart a new course.

Almost three years after Britain voted in June 2016 to leave the EU, and two years after it set its departure date for March 29, 2019, British politicians remain deadlocked over Brexit.

Last week, to prevent Britain from crashing out, an extension to May 22 was granted, had the divorce deal been approved by Friday – or to April 12 if rejected.

The 58-vote margin of defeat for the deal Friday was narrower than in previous votes in January and March, but it still leaves the government’s blueprint for exiting the bloc in tatters.

JOB ON THE LINE

May’s deal was voted down even after the prime minister sacrificed her job in exchange for Brexit, promising to quit if lawmakers approved the agreement and let Britain leave the EU on schedule. With the deal’s rejection, she will face pressure to step aside and let a new Conservative leader take over negotiations with the EU.

May’s arguments moved some previously resistant Brexit backers to support the deal. Former Foreign Secretary Boris Johnson – a likely contender to replace May as Conservative Party leader – tweeted that rejecting it risked “being forced to accept an even worse version of Brexit or losing Brexit altogether”.