Biden defends his behaviour with women 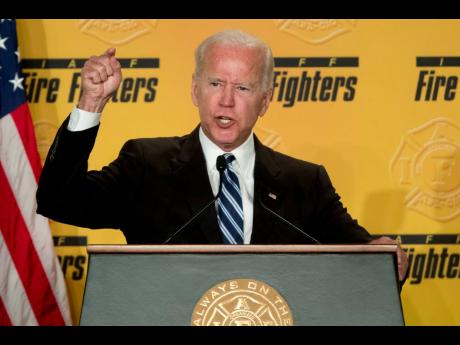 Former United States (US) vice-president Joe Biden said yesterday that he doesn’t believe he ever acted inappropriately towards women but will “listen respectfully” to suggestions that he did.

Biden, who is deciding whether to join the 2020 presidential race, released a new statement in response to allegations from a Nevada politician that he kissed her on the back of the head in 2014 and made her uncomfortable.

“In my many years on the campaign trail and in public life, I have offered countless handshakes, hugs, expressions of affection, support and comfort. And not once – never – did I believe I acted inappropriately,” he said. “If it is suggested I did so, I will listen respectfully. But it was never my intention.”

The allegation was made in a New York Magazine article written by Lucy Flores, a former Nevada state representative and the 2014 Democratic nominee for Nevada lieutenant governor.

Going on the attack against the prospective 2020 contender, White House counsellor Kellyanne Conway said Flores was “quite bold” to “go up against the highest levels of her political party” with the allegations and suggested that Biden should consider apologising to Flores.

“If anybody just types in ‘Creepy Uncle Joe Videos’ you come up with a treasure trove,” Conway told ‘Fox News Sunday’.

“I think Joe Biden has a big ­problem here because he calls it affection and handshakes. His party calls it completely ­inappropriate,” she said.

Some of the Democratic ­presidential candidates have expressed support for Flores, but they haven’t said it disqualifies Biden from ­joining the race.

Sen Amy Klobuchar, a candidate for president, said she had “no reason not to believe” Flores’ allegations.

“And I think we know from ­campaigns and from politics that people raise issues and they have to address them, and that’s what he will have to do with the voters if he gets into the race,” Klobuchar told ABC’s ‘This Week’.

Speaking to reporters in Iowa over the weekend, Massachusetts Sen Elizabeth Warren and former Housing and Urban Development Secretary Julian Castro said they believed Flores and indicated that it’s up to Biden to decide whether he should join the race.

In the New York Magazine ­article published Friday, Flores wrote that she and Biden were waiting to take the stage during a rally in Las Vegas before the 2014 election.

“I felt two hands on my shoulders. I froze. ‘Why is the vice-president of the United States touching me?’” Flores wrote. “He proceeded to plant a big slow kiss on the back of my head.”

The rally’s organiser, Henry R. Munoz III, said in a statement Saturday that he spoke to ­several key people and staff who attended the rally and that they “do not believe that circumstances ­support allegations that such an event took place.”