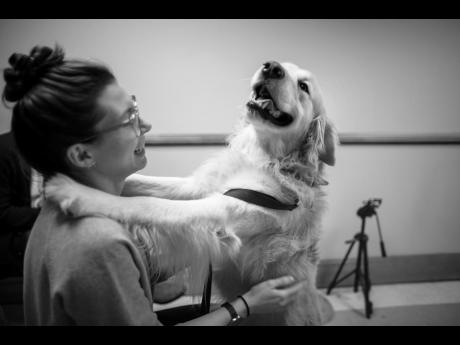 Julia Espinosa pets Loki after a job well done. Like many researchers and volunteers at the lab, Espinosa is a dog lover. When she was 12 years old, her parents wouldn’t let her have a dog – so she started a dog-walking business.

More than 400 animal lovers peacefully marched more than a mile through Havana on Sunday, shouting slogans and waving signs calling for an end to animal cruelty in Cuba.

Short, seemingly simple, the march wrote a small but significant line in the history of modern Cuba. The socialist government had explicitly permitted a public march unassociated with any part of the all-encompassing Communist state, a move that participants and historians call highly unusual and perhaps unprecedented since the first years of the revolution.

“I think it’s very intelligent that they approved the demonstration, or, rather, march,” said singer Silvio Rodriguez, an establishment figure who has criticised official cultural rigidity and who participated in the event. “It makes us feel optimistic. Now we have to see if the same thing will happen with other causes.”

There is no indication Cuba is ­moving towards unfettered freedom of assembly: The state still clamps down on unapproved political speech with swift and massive police mobilisations, waves of arrests and temporary detentions. So a march by independent civil-society groups seeking government action was a remarkable sight in a country where, for nearly 60 years, virtually every aspect of life was part of a single chain of command ending in a supreme leader named Castro.

“It’s unprecedented,” said Alberto Gonzalez, an organiser of the march and publisher of The Ark, an online Cuban animal lovers’ magazine. “This is going to mark a before and an after.”

Since shortly after its foundation, the Cuban Communist government has only permitted the existence of what it calls “legitimate civil society” – groups overseen, sponsored and managed by the state and Communist Party. Those groups are fixtures in the mass marches and gatherings organised by the state on public holidays. On the other end of the spectrum are dissident groups, often with close ties to anti-Castro forces in Miami who want to overthrow the socialist government and reinstall a capitalist system with close ties to Washington. Their attempts at street protests and other forms of organising are almost instantly quashed by state security.

The animal-rights march was monitored by what appeared to at least a couple of dozen plain-clothes state security agents, who watched participants closely but did not interfere. Gonzalez said security officials had asked him to steer the march from the main thoroughfare where it had been authorised to a smaller side street in order to avoid traffic.

It was covered by virtually all major international media based in Havana but did not appear to be covered by most state-run media, a fact that Rodriguez, the legendary singer, called a lost opportunity.

“It’s a shame that after the march was approved, the national press hasn’t covered it,” he said. “It’s sad.”

In the year since Raul Castro handed the presidency to long-time party technocrat Miguel Díaz-Canel in April 2018, churches, civil-society groups and loose associations of like-minded acquaintances have been using the growing availability of Internet in Cuba to organise for various causes, and the state has been ceding them a small degree of freedom to operate.

Artists pushed back successfully against a new law regulating artistic expression. Evangelical churches prodded the government to rescind a proposal to legalise gay marriage. Thousands organised online to get private aid to victims of a tornado in Havana in January. Biologist Ariel Ruiz Urquiola was freed from prison after an online campaign by a wide range of Cubans against his one-year sentence for “disrespecting a forest ranger” ­during a broader campaign against illegal logging and other environmental violations in western Cuba.

“It’s part of a trend towards recognising civil society, in a tacit manner, sometimes a timid one, but one that’s growing little by little,” said Yassel Padron Kunakbaeva, a blogger and intellectual who describes himself as a Marxist revolutionary.

A 10-year-old private group known as Forest Guardians regularly-organises tree plantings and clean-ups of rivers that cross the city of Havana.