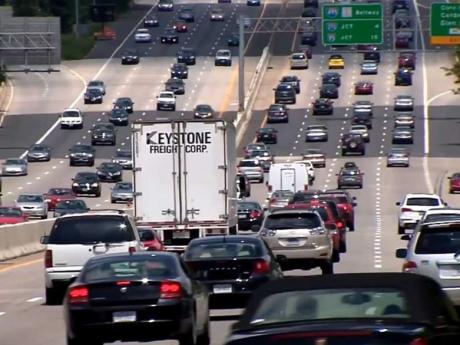 Time is money, and a new report shows just how much time and money American's are wasting sitting in their cars and trucks.

The total last year was $87 billion, or $1,348 per driver, according to new data analysed by research firm INRIX.

Each year, INRIX issues a Global Traffic Scorecard based on millions of pieces of data from connected vehicles, departments of transportation, cellular positioning reports and a number of other sources.

The picture they paint of congestion in the U.S. in 2018 is not pretty, especially when it comes to the excess amount of time we spend behind the wheel slowly working our way to work or some other destination.

INRIX ranks Boston, Washington D.C. and Chicago as the three worst U.S. cities for congestion in terms of hours lost by drivers annually.

The cost of that congestion the Boston area in terms of lost productivity came to $4.1 Billion according to the report.

INRIX says that works out to an average "congestion cost" per Boston area driver of $2,291.

The analysis says Washington, D.C. and Chicago drivers lost 155 and 138 hours respectively due to heavy traffic in 2018.

Both are ranked by INRIX as slightly more congested than New York City and Los Angeles.

"Old cities that did not develop around cars and driving have the worst congestion," said Reed.

Reed says cities in the U.S. are not the worst in the world when it comes to congestion.

Rounding out the Global Traffic Scorecard list of the five worst cities in the world for congestion are Istanbul, Turkey; Bogota, Colombia; Mexico City, Mexico and Sao Paulo, Brazil.