Scientists reveal first image ever made of a black hole 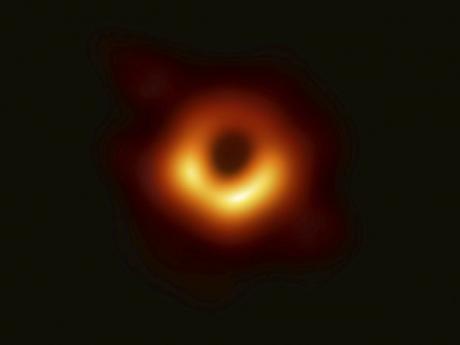 WASHINGTON (AP) — Scientists on Wednesday revealed the first image ever made of a black hole, depicting a fiery orange and black ring of gravity-twisted light swirling around the edge of the abyss.

The picture, assembled from data gathered by eight radio telescopes around the world, shows the hot, shadowy lip of a supermassive black hole, one of the light-sucking monsters of the universe theorised by Einstein more than a century ago and confirmed by observations for decades.

It is along this edge that light bends around itself in a cosmic funhouse effect.

“We have seen what we thought was unseeable. We have seen and taken a picture of a black hole. Here it is,” said Sheperd Doeleman of Harvard, leader of a team of about 200 scientists from 20 countries.

In fact, Jessica Dempsey, a co-discoverer and deputy director of the East Asian Observatory in Hawaii, said the fiery circle reminded her of the flaming Eye of Sauron from the “Lord of the Rings” trilogy.

Unlike smaller black holes that come from collapsed stars, supermassive black holes are mysterious in origin.

Situated at the center of most galaxies, including ours, they are so dense that nothing, not even light, can escape their gravitational pull.

This one’s “event horizon” — the precipice, or point of no return, where light and matter begin to fall inexorably into the hole — is as big as our entire solar system.