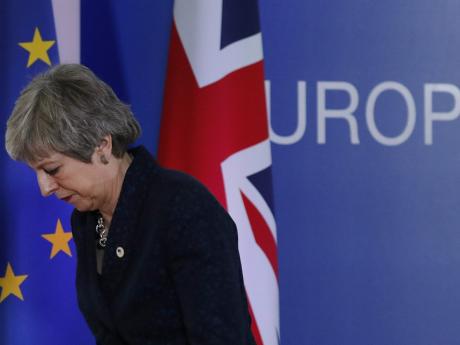 In this Friday, March 22, 2019 file photo, British Prime Minister Theresa May leaves after addressing a media conference at an EU summit in Brussels. May is off to Brussels to ask for a delay to Britain’s departure from the European Union. (AP Photo/Frank Augstein, File)

BRUSSELS (AP) — Just two days away from a potentially calamitous no-deal Brexit, European Union leaders opened talks Wednesday to discuss granting the United Kingdom a new delay — possibly of up to a year — to its departure from the bloc.

It’s likely to be a rough day for British Prime Minister Theresa May as she pleads for a second extension until June 30, to prevent Britain’s scheduled departure from the EU this Friday.

European Council President Donald Tusk has suggested an even longer delay of up to a year, with conditions attached to ensure Britain does not stymie EU decision-making if it remains a member.

According to the latest draft conclusions Wednesday, Britain would have to act “in a constructive and responsible manner throughout this unique period” of extended withdrawal, and would have to show “sincere cooperation.”

It would have to act in “a manner that reflects its situation as a withdrawing member state.”

In Berlin, German Chancellor Angela Merkel said the EU has “expectations” of Britain so that EU institutions can continue functioning “seamlessly.”

The issue has come up after some British Conservative politicians threatened to become obstructionist.

One of them, Mark Francois, said that if the U.K. remained in the bloc, “then in return we will become a Trojan Horse within the EU.”