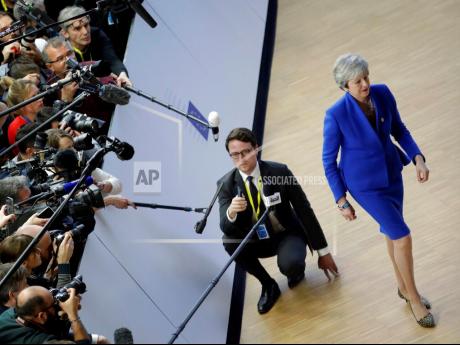 AP
British Prime Minister Theresa May (right) walks away after speaking with the media after she arrives for an EU summit at the Europa building in Brussels, on Wednesday.

LONDON (AP) — The Latest on Britain's departure from the European Union (all times local):

Germany's foreign minister says the delay granted to Britain on leaving the trade bloc should be used to determine how to avoid a no-deal Brexit but should not be taken as a sign that the EU would renegotiate an agreement.

Foreign Minister Heiko Maas told reporters in Berlin today "a decision was taken that averted the unregulated Brexit for the time being, however this must not be misinterpreted in such a way that there is new negotiating scope about the agreement."

He says it's in Europe's best interests to prevent a no-deal "hard Brexit," which is why the extension was given.

He says "I hope the extra time that has now been granted will be used to swiftly bring things to a mutually beneficial conclusion."

British Prime Minister Theresa May is urging Parliament to come together behind a Brexit compromise as quickly as possible to avoid taking part in European elections set for late May.

She told Parliament she still hopes an agreement can be reached even though the House of Commons has three times rejected her withdrawal plan.

May says constructive talks with the opposition Labour Party are ongoing and may lead to an agreement that both the Conservatives and Labour can back.

If that approach fails, she again promised a series of votes in Parliament on a limited number of options and agreed to accept the results.

The prime minister says she knows the country is "intensely frustrated" by the failure to deliver Brexit on time and urged lawmakers to "reflect" over the upcoming Easter break.

A German trade association is welcoming the extension to Britain's Brexit deadline but says the uncertainty caused by Britain's protracted deliberations is not helping anyone.

The Federal Association of Wholesale, Foreign Trade, Services e.V., known as the BGA, says: "The EU has chosen the lesser evil; no one would be served by chaos."

But it says, "the economic price for this is that companies on both sides of the Channel are being left up in the air for the coming months on the shape of future economic and trade relations."

BGA adds "this crippling uncertainty clouds the mood and leaves its economic impact on both sides of the Channel."

A senior German government official is calling on Britain to "deliver right now" on Brexit and says the delay to its departure from the European Union should be "as short as possible."

EU leaders have set a new Oct. 31 deadline but left open the possibility of an earlier departure if London ratifies a withdrawal agreement.

In a tweet, Germany's deputy foreign minister, Michael Roth, said the so-called "flextension" should be as "short as possible! All options are on the table! Dear British friends, deliver right now."

Manfred Weber, a German who leads the biggest group in the European Parliament, said Europe showed "patience and unity" to avoid a damaging 'no-deal' Brexit but "the political uncertainty in London has been extended, which risks affecting debates about the future of Europe."

In a tweet, he voiced his hope that the U.K. can "deliver Brexit before the European elections" in late May.

U.S. President Donald Trump has complained that the European Union is treating Britain unfairly over Brexit.

In a tweet after Britain was granted an extension to its departure from the EU to Oct. 31, Trump said it is "too bad that the European Union is being so tough."

He also said the EU is "likewise a brutal trading partner with the United States" and promised that will change.

Conservative Party legislator Ken Clarke says he does not believe British Prime Minister Theresa May will be able to convince the party to back her Brexit withdrawal deal.

The former Treasury chief told the BBC that the Conservative Party's right-wing would continue blocking her deal and trying to replace her.

May plans to press Parliament to pass her withdrawal plan in time to avoid European Parliament elections in late May. It has been defeated three times.

Clarke says the only way forward is for May's government to compromise with the Labour Party to produce a consensus.

He says a solution would be one that takes Britain out of the European Union's political institutions but keeps close economic ties.

"This is a perfectly sensible compromise and I think she would get it through Parliament," he said.

Scotland's first minister, Nicola Sturgeon, has voiced her "relief" that there won't be a 'no-deal' Brexit this Friday after Britain was granted an extension to Oct. 31 to leave the European Union.

In a tweet, the leader of the Scottish National Party, warned of tough negotiations ahead and said the extra time should be used to allow "people to decide if they still want to leave."

Sturgeon has been a staunch opponent of Brexit and said "Scotland's interests must be protected" in any agreement.

Scotland voted in favour of remaining in the EU in the 2016 referendum that saw Britain as a whole opt to depart.

One of Britain's leading business lobby groups says the Brexit extension granted to the country at a summit in Brussels overnight means an "imminent economic crisis" has been averted.

However, the Confederation of British Industry is warning that a fresh start is needed to avoid more acute uncertainty in the run up to the new Oct. 31 Brexit deadline.

CBI director-general, Carolyn Fairbairn, said businesses will be adjusting their plans to cope with a potential 'no-deal' Brexit later in the year but won't be cancelling them.

She says Britain's leaders must make productive use of the time afforded by the extension announced by the EU following hours of discussions.

"Sincere cross-party collaboration must happen now to end this crisis," she said.

Cross-party talks between the government and the opposition Labour Party have not produced a breakthrough in the Brexit impasse.