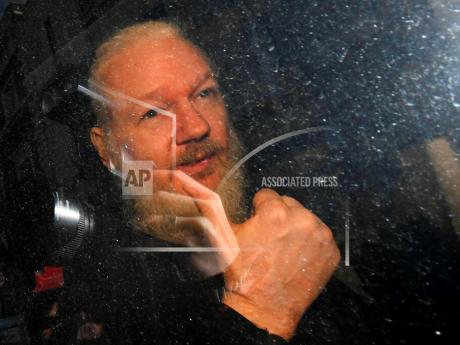 AP
Julian Assange gestures as he arrives at Westminster Magistrates' Court in London, after the WikiLeaks founder was arrested by officers from the Metropolitan Police and taken into custody today.

LONDON (AP) — The Latest on the arrest of WikiLeaks founder Julian Assange in London (all times local):

A judge in London has found WikiLeaks founder Julian Assange guilty of breaching his bail at Westminster Magistrates' Court.

Judge Michael Snow quickly issued his verdict on Thursday after Assange appeared in the courtroom where his supporters packed the public gallery.

Assange faces a sentence of up to 12 months for the conviction, and has serious charges pending in the United States.

The basis of Assange's defence was that he couldn't expect a fair trial in British courts as the U.K.'s purpose was to "secure his delivery" to the United States

WikiLeaks founder Julian Assange has entered an innocent plea to a charge that he failed to surrender to custody under an order for his extradition to Sweden.

Assange faced sexual assault allegations in Sweden when he sought asylum in the Ecuadorian Embassy in London 2012. The sexual assault charges have since been dropped, but a charge of skipping bail remained in place.

He entered the plea at Westminster Magistrates Court on Thursday.

He is also facing a potential court battle over attempts to extradite him to the United States to answer charges related to the publication of tens of thousands of secret government documents.

Julian Assange is appearing in a London court as it considers a U.S. extradition request on criminal charges over the publication of tens of thousands of secret government documents.

Assange saluted supporters who packed a public gallery at Westminster Magistrates Court on Thursday and gave them a thumb's-up.

Wearing a black suit and polo shirt, Assange calmly sat reading a Gore Vidal book while waiting for his lawyers to arrive.

Police in London arrested the WikiLeaks founder at the Ecuadorian embassy, where he took refuge in August 2012.

The U.S. Justice Department has charged WikiLeaks founder Julian Assange with conspiring with Chelsea Manning to break into a classified government computer.

The charge was announced Thursday after Assange was taken into custody in London in connection with a U.S. extradition request, as well as for breaching U.K. bail conditions in 2012.

His lawyer has previously said that Assange planned to fight any U.S. charges against him.

Ecuador's government says that as part of its decision to expel Julian Assange from its embassy in London, it has withdrawn the Ecuadorian citizenship he was granted last year in a failed attempt to end the activist's tumultuous stay at its diplomatic mission.

Ecuador also accused supporters of WikiLeaks and two Russian hackers of attempting to destabilise their country.

Interior Minister Maria Paula Romo said in Quito a close collaborator of WikiLeaks had travelled with former Foreign Minister Ricardo Patino this year to several countries, including Peru, Spain and Venezuela, in an attempt to undermine the government. She did not identify the individual but said their name, as well as two Russian hackers working in Ecuador, would be turned over to judicial authorities in the coming hours.

Britain's Prime Minister Theresa May says the arrest of Julian Assange shows that "no one is above the law."

May was speaking to the House of Commons after the arrest of the WikiLeaks founder, who was dragged out of the Ecuadorian Embassy Thursday after taking refuge there for seven years to avoid extradition. Ecuador announced it was revoking Assange's asylum status, citing repeated violations of international conventions.

Assange is expected to appear at Westminster Magistrates court later Thursday on allegations of breaching bail conditions dating to 2012, and on extradition charges to the United States.

The official spoke Thursday on condition of anonymity because no charges have yet been announced.

The exact nature of the charges was not immediately known.

Assange was arrested Thursday in London by police for breaching 2012 bail conditions as well as on an extradition request from the United States.

--By Eric Tucker in Washington, D.C.

Sweden's Chief Prosecutor Ingrid Isgren says "we have not been able to decide on the available information" whether a stalled investigation into alleged sexual offences against Julian Assange could be reopened if he returns to Sweden before the statute of limitations lapses in August 2020.

In 2017, Swedish prosecutors dropped a long-running inquiry into a rape claim against Assange, saying there was no way to detain or charge him "in the foreseeable future" because of his protected status inside the Ecuadorian Embassy in London.

Assange was arrested earlier Thursday at the embassy, where he had been holed up for seven years

"Images of Ecuador's ambassador inviting the U.K.'s secret police into the embassy to drag a publisher of--like it or not--award-winning journalism out of the building are going to end up in the history books," Snowden said in a tweet.

"Assange's critics may cheer, but this is a dark moment for press freedom."

Snowden was charged by the United States in 2013 of violating the country's espionage act. He was granted asylum by Russia that year and the asylum has been extended until at least 2020.

London police say they have arrested Julian Assange on extradition charges to the United States, as well as for breaching U.K. bail conditions.

Scotland Yard said in a statement Thursday that Assange was "further arrested on behalf of the United States authorities, at 10:53hrs after his arrival at a central London police station. This is an extradition warrant under Section 73 of the Extradition Act."

The WikiLeaks founder sought political asylum in the Ecuadorian embassy in London in 2012, after he was released on bail while facing extradition to Sweden on sexual assault allegations. The accusations have since been dropped but he was still wanted for jumping bail.

Separately, he has been under U.S. Justice Department scrutiny for years for WikiLeaks' role in publishing thousands of government secrets.

A senior member of Germany's opposition Left party says Europe must not allow WikiLeaks founder Julian Assange to be extradited to the United States for trial.

Sevim Dagdelen said in a statement that the withdrawal of Assange's political asylum by Ecuador and his subsequent arrest by British police was a "scandal, a violation of international law, and at the same time a severe blow to independent journalism."

She says it is the German government's "duty" now to prevent Britain, which earlier Thursday was granted an extension to its departure from the European Union, from extraditing Assange to the U.S., "where he faces life imprisonment or even the death penalty for exposing U.S. war crimes."

Julian Assange's attorney Jennifer Robinson says the WikiLeaks founder had been arrested on an extradition request from the United States as well as on charges of breaching his bail conditions.

In a tweet, Robinson said Assange "has been arrested not just for breach of bail conditions but also in relation to a US extradition request."

The U.S. Justice Department inadvertently revealed the existence of a sealed criminal case against Assange in a court filing last year. It's not clear what he's been accused of.

Former Army intelligence analyst Chelsea Manning, who leaked a trove of classified material to WikiLeaks, was jailed last month after she refused to testify before a grand jury.

In a statement Thursday, Justice Department spokesman Marc Raimondi said: "We are aware of the reports that Julian Assange was taken into custody by United Kingdom authorities."

The Swedish woman who alleged that she was raped by Julian Assange during a visit to Stockholm in 2010 has welcomed his arrest in London.

Elisabeth Massi Fritz, the lawyer for the unnamed woman, says news of Assange's arrest earlier Thursday came as "a shock to my client" and that it was something "we have been waiting and hoping for since 2012."

Massi Fritz said in a text message sent to The Associated Press that "we are going to do everything" to have the Swedish case reopened "so Assange can be extradited to Sweden and prosecuted for rape."

Massi Fritz said "no rape victim should have to wait nine years to see justice be served."

In 2017, Sweden's top prosecutor dropped a long-running enquiry into a rape claim against Assange, saying there was no way to have Assange detained or charged within a foreseeable future because of his protected status inside the embassy.

WikiLeaks has accused "powerful actors," including the CIA, of a "sophisticated" effort to dehumanise Julian Assange.

The comments by the organisation Assange founded came soon after he was arrested at the Ecuadorian Embassy in London, where he had been holed up for seven years.

In a tweet, the organisation posted a photo of Assange with the words: "This man is a son, a father, a brother. He has won dozens of journalism awards. He's been nominated for the Nobel Peace Prize every year since 2010. Powerful actors, including CIA, are engaged in a sophisticated effort to dehumanise, delegitimise and imprison him. #ProtectJulian."

Shortly after Assange's arrest in London, Dmitry Peskov told reporters that he could not comment on the overall case.

But, he said, "We of course hope that all of his rights will be observed."

Lenin Moreno announced the "sovereign decision" in a statement accompanied by a video on Twitter on Thursday.

Assange hasn't left the embassy since August 2012 for fear that if he steps off Ecuador's diplomatic soil he would be arrested and extradited to the U.S. for publishing thousands of classified military and diplomatic cables through WikiLeaks.

London police arrested Assange at the embassy Thursday on a court warrant issued in 2012, when he failed to surrender to the court.

British Foreign Secretary Jeremy Hunt thanked Moreno for breaking the impasse, saying on Twitter that Assange "is no hero and no one is above the law."

Police in London say they've arrested WikiLeaks founder Julian Assange at the Ecuadorian embassy on a court warrant dating back to 2012.

In a statement Thursday, police said Assange has been taken into "custody at a central London police station where he will remain, before being presented before Westminster Magistrates' Court as soon as is possible."

Assange hasn't left the embassy since August 2012 for fear that if he steps off Ecuador's diplomatic soil he will be arrested and extradited to the U.S. for publishing thousands of classified military and diplomatic cables through WikiLeaks.