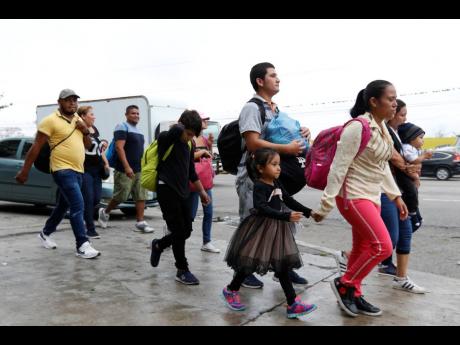 AP
Migrants walk along a highway as a new caravan of several hundred people sets off in hopes of reaching the distant United States, in San Pedro Sula, Honduras, shortly after dawn yesterday.

Hundreds of Honduran migrants, many carrying young children, set out in a caravan for that country’s border with Guatemala yesterday, hoping to reach the United States.

Some of those who gathered at the San Pedro Sula bus station said they can’t support their families with what they can earn in Honduras and are seeking better opportunities.

Most boarded buses before dawn that would carry them to towns on the Guatemalan border. Others walked through the rain, some pushing strollers or carrying sleeping children in their arms.

Guatemalan immigration authorities said that their Honduran counterparts informed them that about 1,100 migrants were headed for their common border, mostly aboard buses to two crossing points. They said some were already crossing into Guatemala.

Nohemy Reyes, who waited at the bus station with one of her five children sleeping on floor beside her, said her country’s economic straits are driving her north.

“The economic situation is very difficult,” she said. But if she finds the US border closed, she said, she will return to Honduras.

US President Donald Trump this week threatened to close the US-Mexico border before changing course and threatening tariffs on automobiles produced in Mexico if that country does not stop the flow of Central American migrants.

US border facilities have been overwhelmed by the number of migrant families. US Customs and Border Protection announced this week that 53,000 parents and children were apprehended at the southern border in March.

Department of Homeland Security Secretary Kirstjen Nielsen resigned this week and was replaced by US Customs and Border Protection Commissioner Kevin McAleenan in an acting capacity.

Trump on Tuesday said he isn’t planning on reinstating his controversial family separation policy. Last summer, more than 2,500 children were separated from their families before a judge ordered them reunited.

The caravans became a popular way of making the trek because the migrants find safety in numbers and save money by not hiring smugglers.

In late March, Mexico’s interior secretary warned that the “mother of all caravans” was forming. That did not materialise, but Central American officials criticised the announcement, saying it could inspire migrants to merge into another caravan.

Miguel Angel Reyes of San Juan Pueblo, Honduras, said his country’s violent crime was one factor in his decision to leave, but mostly he was looking for a way to provide for his wife and four children.

“I’m going because the situation is really hard here in Honduras,” said the field worker. “We can’t take it anymore. There’s a lot of suffering, no work.”