UK’s May says politicians have duty to complete Brexit 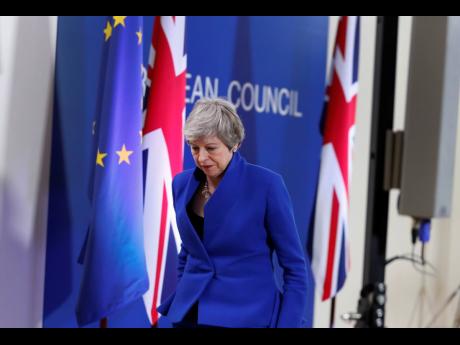 The Associated Press
British Prime Minister Theresa May leaves the podium after addressing a media conference at the conclusion of an EU summit in Brussels on Thursday, April 11.

Granted a Brexit reprieve by the European Union (EU), British Prime Minister Theresa May urged lawmakers yesterday to pause, reflect on the need for compromise – and then fulfil their “national duty” to approve a divorce deal and take Britain out of the EU.

But there was little sign the United Kingdom’s divided and exhausted lawmakers had heeded the EU’s plea not to waste the six months of extra time granted to Britain at an emergency summit in Brussels.

Updating the House of Commons hours after the 27 other EU leaders agreed to postpone Brexit until October 31, May said she knew the country was “intensely frustrated” by the impasse.

“I never wanted to seek this extension,” May said. She urged members of Parliament to take stock and “reflect” over a 10-day Easter break that starts Friday.

“We need to resolve this so that we can leave the European Union with a deal as soon as possible,” she said. “This is our national duty as elected members of this House.”

Consensus, however, was in short supply. Opposition Labour Party leader Jeremy Corbyn, with whom May hopes to strike a compromise accord, called the Brexit delay “another milestone in the government’s mishandling of the entire Brexit process.

“The prime minister stuck rigidly to a flawed plan and now the clock has run down, leaving Britain in limbo,” Corbyn said.

And there was little solace for May on her own side of the House of Commons, as pro-Brexit lawmakers from her Conservative Party accused her of capitulating to Brussels.