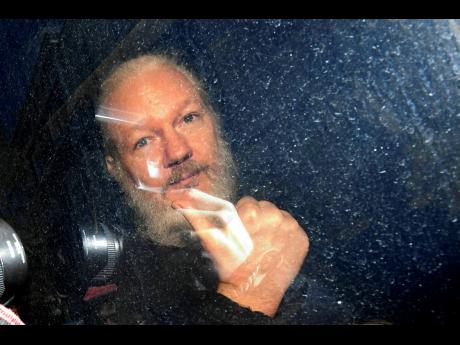 The Associated Press
Julian Assange gestures as he arrives at Westminster Magistrates’ Court in London, after the WikiLeaks founder was arrested by officers from the Metropolitan Police and taken into custody Thursday April 11, 2019. Police in London arrested WikiLeaks founder Assange at the Ecuadorean embassy Thursday, April 11, 2019 for failing to surrender to the court in 2012, shortly after the South American nation revoked his asylum .(Victoria Jones/PA via AP)

A bearded and shouting Julian Assange was pulled from the Ecuadorian Embassy in London and hauled into court yesterday, the start of an extradition battle for the WikiLeaks founder who faces US charges related to the publication of tens of thousands of secret government documents.

Police arrested Assange after the South American nation revoked the political asylum that had given him sanctuary for almost seven years. Ecuador President Lenin Moreno said he took the action due to “repeated violations to international conventions and daily-life protocols”.

In Washington, the US Justice Department accused Assange of conspiring with former US Army intelligence analyst Chelsea Manning to break into a classified government computer at the Pentagon. The charge was announced after Assange was taken into custody.

His lawyer said the 47-year-old Assange would fight extradition to the US.

Assange took refuge in the embassy in 2012 after he was released on bail in Britain while facing extradition to Sweden on sexual assault allegations that have since been dropped. He refused to leave the embassy, fearing arrest and extradition to the US for publishing classified military and diplomatic cables through WikiLeaks.

Manning, who served several years in prison for leaking troves of classified documents before her sentence was commuted by then President Barack Obama, is again in custody in Alexandria, Virginia, for refusing to testify before a grand jury investigating WikiLeaks.

Over the years, Assange used Ecuador’s embassy as a staging post to keep his name before the public, frequently making appearances on its tiny balcony, posing for pictures and reading statements. Even his cat became well-known.

But his presence was an embarrassment to United Kingdom authorities, who for years kept a police presence around the clock outside the embassy, costing taxpayers millions in police overtime. Such surveillance was removed in 2015, but the embassy remained a focal point for his activities.

Video posted online by Ruptly, a news service of Russia Today, showed several men in suits pulling a handcuffed Assange out of the embassy and loading him into a police van while uniformed British police formed a passageway. Assange, who shouted and gestured as he was removed, sported a full beard and slicked-back grey hair.

He later appeared in Westminster Magistrates’ Court, where District Judge Michael Snow wasted no time in finding him guilty of breaching his bail conditions, flatly rejecting his assertion that he had not had a fair hearing and a reasonable excuse for not appearing.

“Mr Assange’s behaviour is that of a narcissist who cannot get beyond his own selfish interests,” Snow said. “He hasn’t come close to establishing ‘reasonable excuse.’”