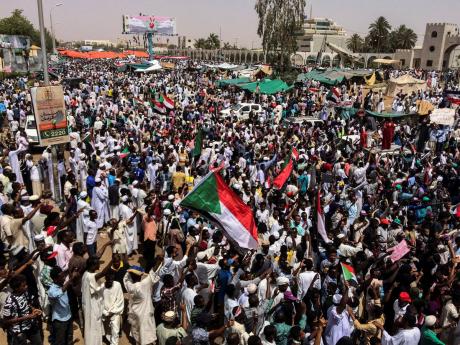 The Associated Press
AP Photos Demonstrators gather in Sudan’s capital of Khartoum, Friday, April 12, 2019. The Sudanese protest movement has rejected the military’s declaration that it has no ambitions to hold the reins of power for long after ousting the president of 30 years, Omar al-Bashir.

Sudanese activists said on Saturday that 16 people, including a soldier, have been killed in the two days since the military forced President Omar al-Bashir from power amid months of anti-government protests, while the military met with an opposition delegation to discuss the transition and announced a nightly curfew had been lifted.

The Sudan Doctors Committee, an affiliate of the Sudanese Professionals Association, which has been spearheading the protests, said 13 people were shot dead on Thursday and three others, including the soldier, were killed Friday.

It said they died “at the hands of regime forces and its shadow militias”.

Sudanese police said late Friday that the 16 were killed by “stray bullets,” and that at least 20 people were wounded at rallies and sit-ins across the country.

The military overthrew al-Bashir on Thursday after almost four months of protests calling for an end to his nearly 30-year rule. Military officials have said he is under house arrest in the capital, Khartoum, and will be tried for unspecified crimes by Sudanese courts.

Al-Bashir is wanted by the International Criminal Court on charges of genocide linked to the war in Sudan’s Darfur region in the 2000s.

The protesters have said they will remain in the streets until a civilian transitional council is formed. They fear the military, which is dominated by al-Bashir loyalists, will rule indefinitely or hand power to one of its own.

Political parties and movements behind the protests said they were meeting Saturday with the military to discuss the transition, saying they’ve formed a 10-member delegation to introduce “the people’s demands” to the military council. They reiterated their rejection of military rule.

Ali al-Sanhouri, the secretary general of the Arab Socialist Baath Party in Sudan, told a news conference in Khartoum that they are calling for the creation of a “civilian sovereignty council, Cabinet and a national legislative association” to rule the country during the transition.

General Abdel-Fattah Burhan, who was sworn in Friday as head of a transitional council formed by the military, said he was lifting the curfew imposed two days earlier, which was to last for a month from 10 p.m.-4 a.m.

In remarks broadcast on state TV, he said the military council will rule the country for up to two years until elections and declared the immediate release of all those detained and tried during the current wave of unrest, which began late last year.

Al-Bashir imposed a state of emergency in February, banning unauthorised public gatherings and granting sweeping powers to the police in efforts to quash the unrest. Hundreds of people were tried before emergency courts.