Fire out, treasures intact but work ahead for Notre Dame 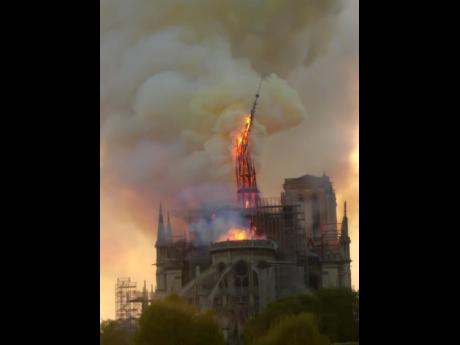 PARIS (AP) — Firefighters declared success Tuesday in a more than 12-hour battle to extinguish an inferno engulfing Paris’ iconic Notre Dame cathedral that claimed its spire and roof, but spared its bell towers and the purported Crown of Christ.

What remained was a blackened shell of the monument immortalised in Victor Hugo’s 1831 novel “The Hunchback of Notre Dame,” a building that had survived almost 900 years of tumultuous French history but was devastated amid renovation works at the start of Catholic Easter week.

Its iconic twin bell towers remained visibly intact. Paris officials said the world famous 18th century organ that boasts 8,000 pipes also appeared to have survived, along with other treasures inside the cathedral, after a plan to safeguard heritage was quickly put into action.

Paris Deputy Mayor Emmanuel Gregoire described authorities’ “enormous relief” at the salvaging of pieces such as the purported Crown of Christ, which were transported to a “secret location” after the fire. Statues removed just days ago for restoration work were also spared.

At dawn, the twin 69-meter towers swarmed with building specialists and architects.

“The entire fire is out,” declared Paris firefighters’ spokesman Gabriel Plus, adding that workers were “surveying the movement of structures and extinguishing smouldering residues.”

Officials consider the fire an accident, possibly as a result of the restoration work at the global architectural treasure.

Paris prosecutor Remy Heitz said the investigation would be “long and complex.”

Fifty investigators were working on the probe, he said, and would be interviewing workers from five companies hired to work on renovations to the cathedral’s roof, where the flames first broke out.