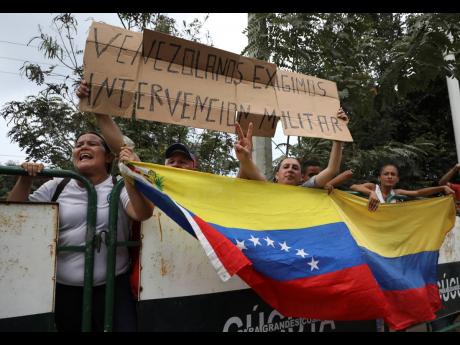 The Associated Press
People hold a Venezuelan flag and the Spanish message: "Venezuelans demand military intervention," on the sidelines of a visit by U.S. Secretary of State Mike Pompeo in La Parada near Cucuta, Colombia, on the border with Venezuela, Sunday, April 14, 2019. Vice President Mike Pence said on Wednesday, April 10 to the U.N. Security Council that the Trump administration is determined to remove Venezuelan President Nicolas Maduro from power, preferably through diplomatic and economic pressure, but repeated the apparent threat of military action by adding that "all options are on the table."

Canada imposed more sanctions yesterday on the government of Venezuelan President Nicolás Maduro, who it blames for the country’s deteriorating political and economic situation.

Foreign Minister Chrystia Freeland announced sanctions against 43 high-ranking Venezuelan officials, including regional governors, and said they were implicated in the undermining of democratic institutions.

Canada had already sanctioned 70 other people linked to Maduro’s government.

The sanctions include asset freezes and ban Canadians from any financial dealings with the targeted individuals.

In a statement, Maduro’s government described the latest sanctions as a violation of international law and said they showed Canada is participating in “imperial aggression” against Venezuela.