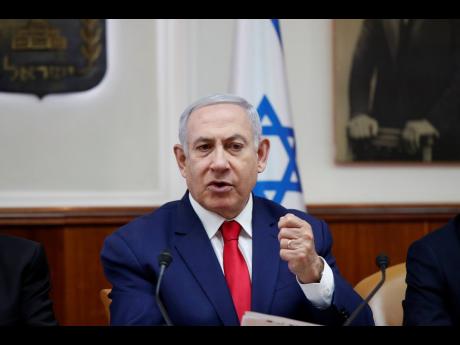 Israel’s president on Wednesday formally nominated Benjamin Netanyahu for a fourth consecutive term as prime minister, officially launching a process that is expected to result in a new government dominated by religious and nationalist parties in the coming weeks.

In one of the president’s few non-ceremonial roles, President Reuven Rivlin tasked Netanyahu with assembling a governing coalition within 42 days.

The move was widely expected after Netanyahu’s Likud party and its right-wing allies captured a majority of seats in parliamentary elections last week.

In a joint appearance after the two leaders signed and presented the official nomination, Rivlin called on Netanyahu to “heal the wounds and rifts” laid bare in Israeli society by the bruising election campaign.

Netanyahu said that he was “moved” to accept his fifth nomination as prime minister “as though it’s the first time, and in a certain way, even more than the first time”.

He said that he would “do everything to earn the trust that the citizens of Israel have bestowed on me”.

In a post-election ritual, Rivlin hosted consultations with party leaders this week to hear their recommendations for who should serve as the next prime minister.

Netanyahu’s nationalist and religious allies all lobbied for Netanyahu to continue as prime minister. The last one to hold out, former Defence Minister Avigdor Lieberman of the hawkish Yisrael Beitenu party, formally confirmed his support for Netanyahu late Monday.

Netanyahu’s right-wing bloc — made up of Kulanu, the Union of Right Wing Parties, Yisrael Beitenu and the ultra-Orthodox Shas and United Torah Judaism — now commands a 65 to 55 majority in the 120-seat parliament.

In the coming weeks, Netanyahu will have to negotiate coalition deals with his partners, who will jockey for powerful Cabinet posts with large and influential budgets.

If Netanyahu fails to form a coalition within 42 days, Benny Gantz, leader of the rival centrist Blue and White party, would be given a shot at assembling a government.

But that doesn’t appear to be in the cards. “We will establish a right-wing government as soon as possible, likely within a month,” said Yonatan Ulrich, a spokesman for the prime minister.