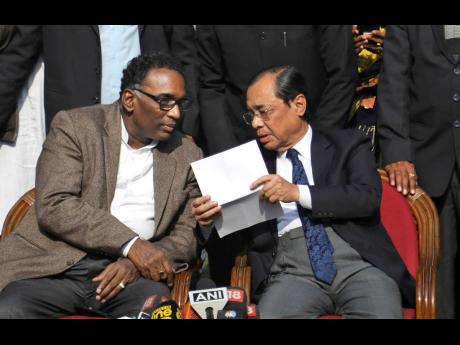 A former employee of India’s Supreme Court has accused the country’s chief justice of sexual harassment, an accusation that was vehemently denied by the judge, the nation’s largest news agency reported Saturday.

The 35-year-old woman filed an affidavit in the Supreme Court on Friday alleging two instances of misconduct in October last year shortly after Ranjan Gogoi took over as India’s most senior judge, the Press Trust of India (PTI) news agency said.

Gogoi convened an urgent court session with the other two justices on Saturday and said the charges were part of a conspiracy by some “bigger force”, according to PTI. He denied the accusation, calling it an attempt to destabilise the judiciary.

“I do not think I should stoop too low even to deny these allegations. But that comes after 20 years of selfless service as a judge,” PTI quoted Gogoi as saying.

The former staffer had worked at Gogoi’s office at his official residence in New Delhi.

The Supreme Court’s secretary general, Sanjeev Sudhakar Kalgaonkar, said the allegations made by the woman had no basis.

Court and government officials were unavailable for comment on Saturday.

Last year, Indian actresses and writers flooded social media with allegations of sexual harassment and assault. India’s junior external affairs minister resigned last year amid accusations by 20 women of sexual harassment during his previous career as one of the country’s most prominent news editors.

India has framed laws for women’s safety, but critics say they have done little to change the status quo.