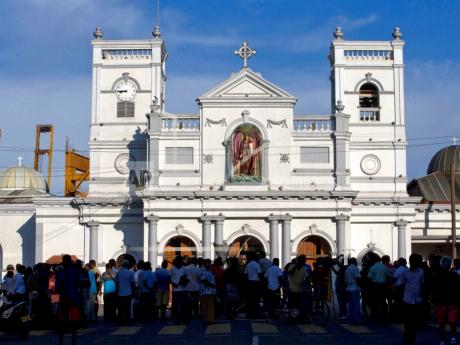 A total of nine bombings on Easter Sunday killed at least 290 people and wounded about 500 more.

Trump pledged United States support to Sri Lanka in bringing the perpetrators to justice, and the leaders re-affirmed their commitment to the fight against global terrorism.

U.S. Secretary of State Mike Pompeo says the U.S. mourns the victims of Easter bomb attacks on churches and hotels in Sri Lanka and is committed to confronting terrorism together with the Sri Lankan people.

At least 290 people died and 500 were injured in nine bomb blasts on Sunday. Sri Lankan officials say the coordinated attacks were carried out by seven suicide bombers from a local militant Muslim group.

Most of the victims were Sri Lankans, but Pompeo confirmed that some were American, without specifying the number. He told journalists on Monday that the U.S. government is offering "all possible assistance" to Americans and Sri Lankans alike.

He added: "Today, our nation grieves with the people of Sri Lanka and we stand committed, resolved, to confront terrorism together."

Sri Lanka's president has given the military sweeping war-time powers to arrest and detain suspects following a series of Easter Sunday bombings that killed at least 290 people.

President Maithripala Sirisena's office announced late Monday that the measure would take effect at midnight. In addition, a government curfew was to begin at 8 p.m.

On Monday, armed security personnel stood guard on street corners in central Colombo that were largely deserted, with most shops closed.

Provisions that granted police powers to the military had been withdrawn at the end of Sri Lanka's civil war, which ended in 2009.

Sri Lanka's minister of tourism says 39 foreign tourists were killed in the Easter Sunday attacks on churches and hotels, while another 28 were wounded.

John Amaratunga says his ministry is working closely with the ministry of foreign affairs and local diplomatic missions to "ensure formalities with regard to the victims are sorted out as quickly as possible."

In Monday's statement he added, "The government has already offered assistance to all victims, the damaged places of worship as well as the hotels affected by Sunday's attacks."

He said Sri Lanka's tourism industry and the government was doing everything possible to ensure the safety of those in the country.

A total of nine bombings Sunday killed at least 290 people and wounded about 500 more.

Pope Francis is asking everyone to join him in condemning the "inhuman" Easter Sunday bombings in Sri Lanka.

Greeting faithful in St. Peter's Square on Monday, Francis also invited prayers for the victims of the attacks, including at least 290 dead and some 500 wounded.

The pope said, "I hope everyone condemns these inhuman and never justified terrorist acts."

Expressing his fraternal closeness to the people of Sri Lanka, Francis encouraged people not to hesitate to offer all necessary assistance in the wake of the nine bombings, which devastated three churches during Easter services and three hotels filled with tourists.

A day earlier, after celebrating Easter Mass in the square, Francis had expressed his sorrow and dismay over the attacks.

A van parked near a Sri Lankan church that was bombed on Easter Sunday has exploded, but no injuries have been reported.

Police went to inspect the van Monday after people reported it had been parked near St. Anthony's Shrine since Sunday.

They discovered three bombs that they tried to defuse. Instead, the bombs detonated, sending pedestrians fleeing in panic.

A series of bombings Sunday killed at least 290 people, including at least 27 foreigners. About 500 others were wounded in the blasts.

Officials said 24 suspects are in custody for questioning

No arrests have been made and investigations are ongoing.

Gunasekara declined to say whether the detonators were linked to a series of bombs that rocked churches, hotels and other sites on Sunday, killing at least 290 people.

Danish media are saying that three of the four children of a Danish business tycoon who is allegedly the Nordic country's richest man and a major private landowner in Britain died in the Sri Lanka bombings.

Danish broadcaster TV2 Monday cited information it received from the Bestseller clothing chain, of which Anders Holch Povlsen is the sole owner. The company didn't provide any further information "out of respect to the family."

Swedish newspaper Aftonbladet said the 46-year-old Holch Povlsen and his wife, Anne Holch Povlsen, were vacationing in Sri Lanka with their children.

The Danish foreign ministry confirmed that three Danish citizens were killed in the Sri Lankan attacks, which claimed over 200 lives.

Sri Lanka's top diplomat in Britain says authorities know of eight British nationals killed in the Easter Sunday bomb attacks on churches and hotels in and around Colombo.

High Commissioner to the UK Manisha Gunasekera told BBC Monday that "as of now" it is believed eight British nationals died. She said the investigation is moving "very swiftly."

British officials have said only that some Britons died. They have not provided information on the number of British casualties. More details are expected to emerge later Monday.

Sri Lanka is a popular holiday destination for Britons.

Health Minister Rajitha Senaratne said at a news conference Monday that all seven bombers linked to the near-simultaneous attacks on three churches and three luxury hotels in and around Colombo were Sri Lankan citizens.

Officials say the causes of three later bombings on Sunday are still being investigated.

He said that while the group is domestic, foreign links are suspected.

A total of nine bombings Sunday killed at least 290 people including at least 27 foreigners. About 500 others were wounded in the blasts.

Officials said 24 suspects are in custody for questioning.

Prime Minister Scott Morrison says the two Australians killed were from the same family and lived in Sri Lanka. One was a dual citizen.

Morrison says two other dual citizens were injured but are in stable conditions. He says one is being treated for shrapnel wounds and the other has a broken leg.

Australia has advised its citizens to reconsider their need to travel to Sri Lanka, the second highest security alert.

Most of the 290 dead were Sri Lankan but the government has confirmed at least 27 foreigners among the dead. The United States, India, Britain, China, Japan and Portugal have confirmed their nationals were among the dead.

A Sri Lankan government forensic crime analyst tells The Associated Press that the six near-simultaneous attacks on three churches and three luxury hotels in and around Colombo on Easter Sunday were carried out by seven suicide bombers.

The government analyst Ariyananda Welianga says an analysis of the attackers' body parts collected from the scenes shows that the attacks were suicide bombings.

Welianga says two people were involved in the attack at the Shangri-La hotel. One bomber each attacked the Cinnamon Grand and Kingsbury hotels and St. Anthony's Shrine in Colombo, St. Sebastian's church in the city of Negombo and Zion Church in the city of Batticaloa.

Two bombings hours later at a guesthouse and near an overpass on the outskirts of Colombo are still under investigation. Suspects detonated explosives at a safe house near the overpass blast, killing three officers.

All told, more than 200 people were killed and 500 wounded in the nine attacks.

A second Chinese citizen has been confirmed killed in the Easter Sunday bombings in Sri Lanka.

Xinhua news agency cited the Chinese Embassy in Colombo as confirming the fatality. The report said the number of injuries among Chinese was still being confirmed. The United States, Britain, India and other countries have also confirmed their citizens were among the 290 dead.

China has extensive business ties with Sri Lanka and is sending growing numbers of business people, tourists and workers to the island.

Both Chinese President Xi Jinping and Premier Li Keqiang have sent condolences and said they firmly support the Sri Lankan government's effort to maintain security and stability, according to Xinhua.

A Sri Lanka military spokesman says that an explosive device was found and defused late Easter Sunday on an access road to the international airport near Colombo.

The discovery came after nine bomb attacks shook Colombo and its outskirts, targeting churches where worshippers were celebrating Easter, luxury hotels frequented by tourists and other sites.

It's not clear what kind of detonation method or target was planned, but Seneviratne said the bomb was large enough to have caused damage to a 400-meter (400-yard) radius.

The United Nations secretary-general is expressing condolences over the Sri Lankan bombings on Easter Sunday.

The statement issued by spokesman Stephane Dujarric said Secretary-General Antonio Guterres was outraged by the terrorist attacks on churches and hotels on a "sacred day for Christians around the world" and hoped the perpetrators will be swiftly brought to justice.

He said Sri Lanka had the support and solidarity of the United Nations in its difficult moment.

The bombings killed 290 people and were Sri Lanka's deadliest violence since a devastating civil war ended a decade ago.

Police say the death toll from the Easter Sunday bombings in Sri Lanka has increased to 290.

The nine bombings of churches, luxury hotels and other sites was Sri Lanka's deadliest violence since a devastating civil war ended a decade ago.

The external affairs minister and the Indian High Commission in Sri Lanka identified the five victims in a series of tweets.

Indian Prime Minister Narendra Modi also spoke to Sri Lankan leaders and condemned the blasts. Modi tweeted, "There is no place for such barbarism in our region. India stands in solidarity with the people of Sri Lanka."

Sri Lankan authorities have said at least 27 of the more than 200 dead were foreigners. The United States said several were Americans but didn't give a figure. Japan has confirmed one dead. Sri Lanka's foreign ministry says one Portuguese, two Turkish nationals, three British nationals and two holding U.S. and British nationalities were among the dead.

Sri Lankan authorities have lifted a curfew that was in place overnight following Easter Sunday bombings that killed more than 200 people.

The streets in the capital, Colombo, were largely deserted Monday morning, with most shops closed and a heavy deployment of soldiers and police. Stunned clergy and onlookers gathered at St. Anthony's Shrine, looking past the soldiers to the damaged church that was targeted in one of the blasts.

The nine bombings of churches, luxury hotels and other sites was Sri Lanka's deadliest violence since a devastating civil war ended a decade ago. Police the death toll, which was 207 late Sunday, had risen overnight but the figure wasn't immediately released.

Police in Sri Lanka say the investigation into the Easter Sunday bombings will examine reports that the intelligence community failed to detect or warn of possible suicide attacks before the violence.

The nine bombings of churches, luxury hotels and other sites was Sri Lanka's deadliest violence since a devastating civil war in the South Asian island nation ended a decade ago. Police spokesman Ruwan Gunasekara said Monday the death toll, which was 207 late Sunday, had risen overnight but the figure wasn't immediately released.