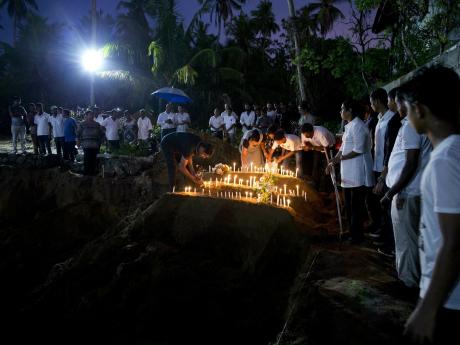 Relatives light candles after the burial of three victims of the same family, who died at Easter Sunday bomb blast at St. Sebastian Church in Negombo, Sri Lanka, Monday, April 22, 2019. Easter Sunday bombings of churches, luxury hotels and other sites was Sri Lanka's deadliest violence since a devastating civil war in the South Asian island nation ended a decade ago. (AP Photo/Gemunu Amarasinghe)

COLOMBO, Sri Lanka (AP) — A top Sri Lanka official said Tuesday the Easter bombings that killed 321 people were carried out by a Islamic fundamentalists in apparent retaliation for the New Zealand mosque massacres last month by a white supremacist, while the Islamic State group sought to claim responsibility for the suicide blasts at churches, hotels and other sites.

The comments in Parliament by Ruwan Wijewardene, the state minister of deafens, came shortly before IS asserted it was responsible for the bombings in and outside of Colombo, although the group gave no evidence to support its claims.

“By now it has been established that the intelligence units were aware of this attack and a group of responsible people were informed about the impending attack,” Wijewardene said.

“However, this information has been circulated among only a few officials.”

He said the government had evidence that the bombings were carried out “by an Islamic fundamentalist group” in retaliation for the mosque shootings on March 15 in Christchurch, New Zealand, that killed 50 people, although he did not disclose what the evidence was.

The office of New Zealand Prime Minister Jacinda Ardern issued a statement responding to the Christchurch claim that described Sri Lanka’s investigation as “in its early stages.”

“New Zealand has not yet seen any intelligence upon which such an assessment might be based,” it said. An Australian white supremacist, Brenton Harrison Tarrant, was arrested in the Christchurch shootings.