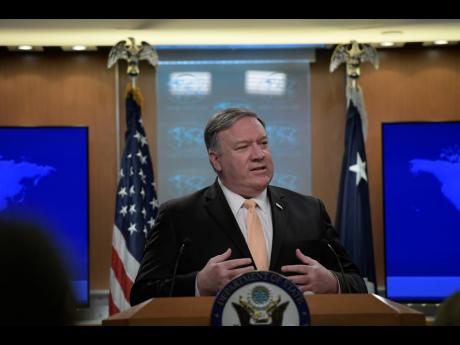 The Associated Press
Secretary of State Mike Pompeo speaks during a news conference on Monday, April 22, 2019, at the Department of State in Washington. (AP Photo/Sait Serkan Gurbuz)

The Trump administration’s decision to impose sanctions on countries that buy Iranian oil is raising concerns about global crude supply and sending oil prices to their highest levels since October.

Industry experts said Monday that the sanctions could potentially remove up to 1.2 million barrels of oil per day from international markets. But that number will likely be lower, depending on how countries respond and just how much oil Iran continues to export.

“It’s difficult to imagine all exports being cut off, especially since China is still a major buyer of Iranian crude oil,” said Jim Burkhard, vice president for oil markets at IHS Markit. “How China responds will go a long way to shape just how much Iranian exports are cut or not.”

To make up for the Iranian losses, Saudi Arabia may increase production that the country had recently trimmed, but it “is going to use up all the spare capacity that they have, or pretty darn close to it, and that is going to leave markets feeling tight,” said Shin Kim, head of supply and production analytics at S&P Global Platts.

Oil prices rose more than two per cent on Monday, helping to lift some energy stocks.

The price of gasolene in the United States was already rising and the development could raise prices further.

“We’ve seen that market tighten up considerably even before the Iranian news, and we’re also seeing a number of refining issues in the US,” said Ryan Fitzmaurice, energy strategist at Rabobank.

Rising oil and gasolene prices can squeeze consumers, whose spending accounts for about 70 per cent of US economic output. “They can take a bite out of consumers’ purchasing power,” said Scott Hoyt, senior director at Moody’s Analytics, where he follows consumer economics.