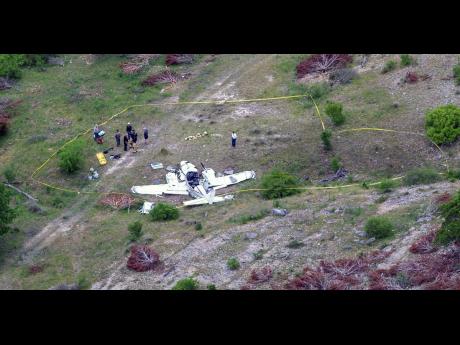 The Associated Press
Authorities investigate at the crash scene of a twin-engine Beechcraft BE58, Monday, April 22, 2019, near Kerrville, Texas.

Witnesses described hearing a twin-engine plane sputter and seeing its tail dragging before the small aircraft flipped over and crashed in central Texas, killing all six people on-board.

The Texas Department of Public Safety in the United Staates said Jeffrey C. Weiss was piloting the Beechcraft BE58 on Monday morning when it went down as it approached Kerrville Municipal Airport, about 70 miles (110 kilometres) northwest of San Antonio. Friends said Weiss, a 65-year-old investment manager, was an experienced pilot who often volunteered to fly sick people to Texas hospitals.

Federal Aviation Administration and National Transportation Safety Board investigators surveyed the site but provided no preliminary information on what might have caused the crash.

“It was making a sput-sput sputtering sound, like the engines were cutting out,” Treva Hardeman told the San Antonio Express-News. She said she was working at home about a quarter of a mile from where the aircraft crashed. “It was just a few seconds later that I heard the boom.”