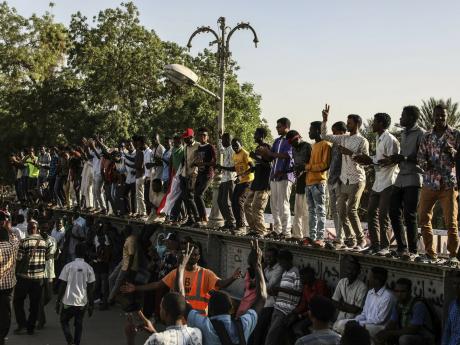 In this Tuesday, April 23, 2019, photo, Sudanese protesters rally in the capital Khartoum. Sudanese activists were holding nationwide protests on Tuesday to press the military to hand over power to a civilian authority after the overthrow of President Omar al-Bashir earlier this month.(AP Photo)

KHARTOUM, Sudan (AP) — The organisers of the protests that drove Sudan’s President Omar al-Bashir from power said Thursday they would delay their announcement of a transitional civilian government after having resumed talks with the ruling military council.

The protesters suspended talks with the military over the weekend, saying its chief negotiator was too close to al-Bashir, and had vowed to name a civilian council at a mass rally Thursday.

But tensions appear to have eased.

The two sides met Wednesday, and later that evening the council announced the resignation of Lieutenant General Omar Zain al-Abdin, who had been leading the talks with the protesters, and two other officials.

“The atmosphere of yesterday’s (meeting) was very positive and I expect that we (will) conclude the matter very soon,” said Ahmed Rabie, a leader of the Sudanese Professionals Association, which spearheaded the four months of protests that drove al-Bashir from power.

The protesters fear that the military, which is dominated by al-Bashir appointees and includes veteran members of the Islamist movement that engineered his 1989 coup, will cling to power or appoint another general in his place.

The military has said it is committed to handing over power to a civilian government within two years, and that it is in talks with all political factions.