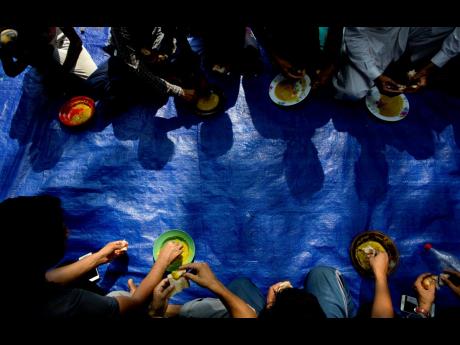 The Associated Press
Ahmadi Muslim refugees eat a meal at a community center that they took refuge in Pasyala, north east of Colombo, Sri Lanka, Thursday, April 25, 2019. Hundreds of Ahmadi Muslims from Pakistan who sought refuge in Sri Lanka now huddle together in fear following attacks and harassment after the Easter bombings. They are just some of the Muslims scared the Islamic State-claimed assault will bring both government and mob retaliation. (AP Photo/Gemunu Amarasinghe)

After fleeing their homes in Pakistan over militant attacks and government persecution, hundreds of Ahmadi Muslims felt they finally found peace in Sri Lanka as they sought resettlement across the world.

Then came the Easter bombings that killed about 250 people, many, Christians praying at church, and suddenly, they were targeted again.

They say that Sri Lankans suspicious of their beards, their little-known faith and nationalities shouted at some, throwing stones and hitting them with sticks. Others saw their homes attacked.

Now, nearly 200 huddle inside their mosque in Negombo, and more than 500 sought shelter in the small town of Pasyala, 30 kilometres (20 miles) away — just one sign of the fear pervading the Muslim community across this multiethnic island off the southern tip of India.

Activists say that some Muslim youth have disappeared, perhaps arrested by tight-lipped security forces, while others stay at home, fearful that the bombings will spark retaliation from either the government or angry mobs in a nation where inter-religious violence can strike.

“The people in Pakistan attacked us and say we’re not Muslims,” said Tariq Ahmed, a 58-year-old Ahmadi who fled his home. “Then in Sri Lanka, people attack us because they say we are Muslims.”

But by Tuesday, the Islamic State group had asserted that it carried out the assault, bolstering its claim by publishing images of Zahran and others pledging loyalty to IS leader Abu Bakr al-Baghdadi.

The Ahmadi Muslims say that the harassment only grew more amplified in the days after the attack, fuelled by a mistaken sense that since they came from Pakistan, they, too, must be like the extremists.