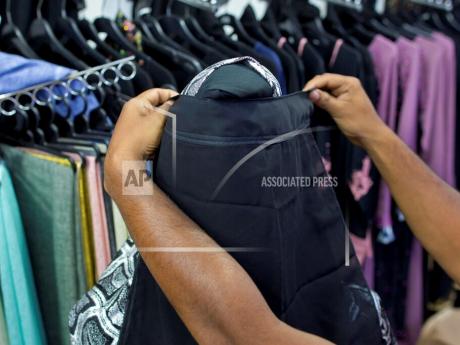 AP
A salesman covers the face of a mannequin with a niqab cafe veil at a women's clothing shop in Kattankudy, Sri Lanka, today.

Now in the wake of Easter suicide attacks launched by Islamic State group-linked militants that killed over 250 people, Sri Lanka's president has used his emergency powers to ban the practice previously unheard of in the island nation off the southern coast of India.

The ban, which took effect today, has been touted as a security measure. However, it criminalises a practice more associated with an ultraconservative form of Islam previously unknown on the island, one that more closely adheres to the strict beliefs more common in Saudi Arabia.

It also focuses public attention on women who practice their religious beliefs peacefully, while the government and foreign diplomats say IS-linked militants armed with explosives still roam the island.

"As we have seen in Afghanistan and elsewhere, Muslim women will become a convenient cover for military action," wrote Nimmi Gowrinathan, a professor at the City College of New York. "Sri Lanka's pain from the Easter attacks should not be used to promote failed policies."

The niqab is a black veil made of thin fabric, often with a small opening from which a woman's eyes can peer out. It's far more concealing than the hijab, a scarf covering the hair that some Muslim women wear.

Most Islamic scholars and experts say a woman is not religiously required to cover her face with a niqab. However, strictly orthodox Sunni Muslims known as Salafists who advocate a literal return to centuries-old Islamic law believe women must cover their faces.

Such ideas previously were unknown in Kattankudy, a city 220 kilometres (135 miles) northeast of the capital, Colombo. But gradually, foreign money and ideas have entered the area.

The population grew more conservative, reflected in the current construction here of a massive copy of Jerusalem's famed Al Aqsa mosque, the third-holiest site in Islam. The alleged mastermind of the Easter bombings, Mohammed Zahran, also preached an increasingly extremist version of Islam in Kattankudy glorifying the killing of non believers.

Sri Lankan Prime Minister Ranil Wickremesinghe acknowledged to The Associated Press in an interview that authorities wanted to investigate the role of foreign money in the Easter attacks, saying in particular that money from Saudi Arabia had been going to religious organisations.

"Saudi Arabia or the Middle East has been the source of many of those funds and some of it has gone into these extreme organisations," Wickremesinghe told the AP on Thursday. "These are what we are investigating."

The Saudi government did not immediately respond to a request for comment Monday.

Sri Lankan President Maithripala Sirisena, who like other government officials faces widespread criticism over security agencies' failure to stop the bombings despite having specific prior warnings, banned the practice on Sunday. Under Sri Lanka's emergency regulations, invoked after the bombing, the measure took effect Monday.

Sirisena "has taken steps to ban . all forms of face covers that may hinder one's identity been ascertained, as a threat to national security and public safety," an English-language statement from his office read. "This directive specifies the need for one's face been clearly visible for ascertaining their identify as its main criterion."

The statement added that Sirisena "issued this directive to ensure national security and a peaceful and reconciled society, where no ethnic group or community would be subjected to discomfort."

However, such a measure wouldn't have stopped the suicide bombings of the three churches and three hotels on Easter, as all were carried out by men. But some Muslim women acknowledged the need to follow the government's laws amid the ongoing crisis.

"It's good (the ban on face covering) but some people will feel some hurt because that's the Islamic culture," Fathima Musthaque said. "When they are dressing (without covering their face), they get a guilty feeling."

She added: "All Muslims are not a terrorist. The terrorists are doing this kind of work and it has affected all . not only Muslims, but all the Sri Lankan people."

On Monday, the first day of the ban, Associated Press journalists briefly saw only one woman wearing the niqab on the streets. However, many shops and businesses remain closed as the threat of more attacks remains. In Kattankudy, few women were on the street.

Neighbourhood hijab shops sold colorful scarves as well as ones that are simply black, some called "Dubai style." Their shelves bore alcohol-free perfumes named after the Burj Kahlifa, the world's tallest building in Dubai, as well as one called Zam Zam, the name of a well in Mecca that Islamic tradition holds appeared by God's hand to quench the thirst of one of Ibrahim's children.

Two teenage salesmen, who gave their names only as Adhnan and Atheek for fear of reprisal for talking to journalists, said they sold at least five niqabs a week. They disagreed over whether they'd asked their own wives to wear the niqab. Adhnan said his mother had worn it since Sri Lanka's long civil war ended after getting a "deeper understanding of religion."

"I don't want anyone to look at my wife," he added.