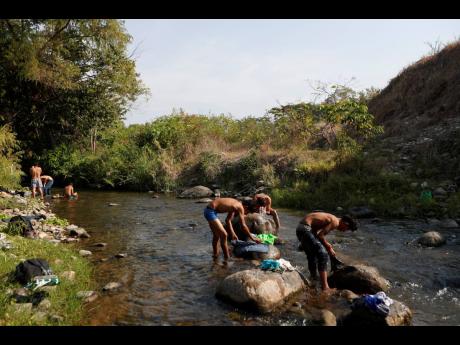 The Associated Press
Central American migrants travelling in a caravan headed to the US border wash clothes and take baths in a river on a rest day near Mapastepec in Chiapas state.

Thousands fleeing conflict or poverty in Nigeria, Cameroon, Bangladesh, Haiti and Cuba have travelled across oceans, through the jungles and mountains of South America, up through Central America on a route that – so far – ends here: the steamy, crumbling Mexican city of Tapachula, near the Guatemala border.

Over 1,500 of them while away the weeks – or months – in a park dotted by giant ceiba trees and vines, awaiting exit visas that never seem to come, like a Mexican version of the movie Casablanca. Some say they’ve given up hope of reaching the United States (US) and just want papers that will allow them to work in Mexico – but northern Mexico, where wages are higher. The government is not prepared to grant that, so it keeps them here, waiting. Perhaps for an asylum ruling, perhaps residency status.

Their lives are a daily round of boredom, a lack of answers from authorities, dirty, overcrowded bathrooms and insufficient food. Those who still have money sometimes sneak out of the compound by jumping a wall and buying their own groceries to cook over open fires. The international melange of migrants seems to share a taste for rice and lentils, not the tortillas, beans and eggs provided by Mexican authorities.

Maureen Meyer, director for Mexico and migrant rights at the Washington Office on Latin America, said that word quickly spread through international smuggling networks that Mexico had become more permissive for migrants. Attention drawn to the large caravans meandering north to the US last year, combined with Mexico’s fast track for thousands of humanitarian visas in January, appeared like welcome mats on the global stage. At the same time, it became more difficult for migrants in Asia or Africa to reach Europe.

Now the Mexican government is trying to get a better handle on the flows – and perhaps even limit transit visas – amid pressure from US President Donald Trump to clamp down on migration to the US.

“They didn’t fully assess the ­messaging of being a more open country,” said Meyer. “It’s obviously a very difficult situation” for Mexico.

The backlog on Mexico’s southern border also appears, in part, to be a function of budget cuts, as well as the country’s limited capacity to handle large numbers of migrants, especially those from distant countries, some of which lack the infrastructure to handle repatriations.

Trump has repeatedly threatened to close the US border with Mexico if the heavy flow of migrants to the US continues.

“The Mexican government’s decision to detain as many migrants as possible, after President Trump put pressure on them to do so, has made it clear just how many third-­country nationals from outside Central America are actually in the country,” said Andrew Selee, president of the Washington-based Migration Policy Institute.

Many of the migrants waylaid in southern Mexico take the ­interminable wait for visas in stride; they have been through much worse on their long, ­torturous journeys.

“The thief took my backpack with my telephone, my ­documents, my passport. He took everything,” recounted Paul Eneceron, a 21 year-old economy student from Port-au-Prince, Haiti, who set out on January 13 from Chile – where he worked packing fish and ­baking cakes for two-and-a-half years – hoping to reach Mexico, where he has relatives among the thousands of Haitians who have settled in Tijuana.

He crossed through Peru, Ecuador and Colombia, but, like most, he found the border between Panama and Colombia to be the most dangerous. It is patrolled by bandits toting guns and machetes who call themselves ‘Los Indios’ (‘The Indians’) even though they have no links to Panama’s indigenous population. It was there that the bandits sprang out of the jungle. “He (the robber) pointed the pistol at me and said: ‘Hand over everything.’ And I gave him my backpack.”

One of the longest routes was that travelled by Musa Kolo, a welder from Nigeria. He said he fled violence from the Islamic extremist group Boko Haram in Nigeria’s Borno State several months ago and made his way to the Ivory Coast, where he stowed away on a freighter. Once he was discovered, the crew took pity on him and left him off in Brazil, and he made his way up through Colombia and on to Panama. From there, the route – now well-worn – leads through Costa Rica, Nicaragua, Honduras, Guatemala and finally Mexico.