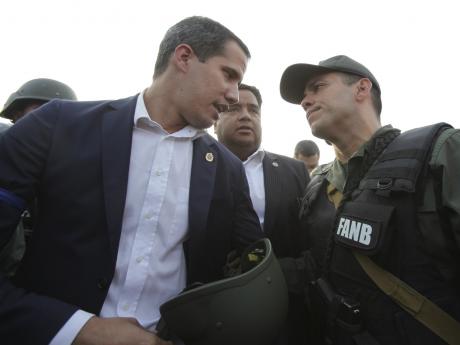 CARACAS, Venezuela (AP) — Venezuelan opposition leader Juan Guaidó took to the streets with activist Leopoldo Lopez and a small contingent of heavily armed troops early Tuesday in a bold and risky call for the military to rise up and oust socialist leader Nicolas Maduro.

“I want to tell the Venezuelan people: This is the moment to take to the streets and accompany these patriotic soldiers,” said Lopez, who had been detained since 2014 for leading anti-government protests. “Everyone should come to the streets, in peace.”

Lopez said he has been freed from house arrest by members of the security forces responding to an order by Guaidó, whom the U.S. and dozens of other governments recognise as Venezuela’s rightful leader.

As he spoke on a highway overpass, troops loyal to Maduro sporadically fired tear gas from inside the adjacent Carlota air base as the crowd of a few hundred civilians, some of them brandishing Venezuelan flags, scurried for cover.

The crowd swelled to a few thousand as people sensed what could be their strongest opportunity yet to overthrow the government after months of turmoil that has seen Maduro withstand an onslaught of protests and international pressure with the support of his top military command and allies such as Russia and Cuba.

“It’s now or never,” said one of the young rebellious soldiers, his face covered in the blue bandanna preferred by the few dozen soldiers who stood alongside Guaidó and Lopez.

The dramatic events playing out in the opposition’s stronghold in wealthier eastern Caracas appeared not to have triggered a broader military revolt.