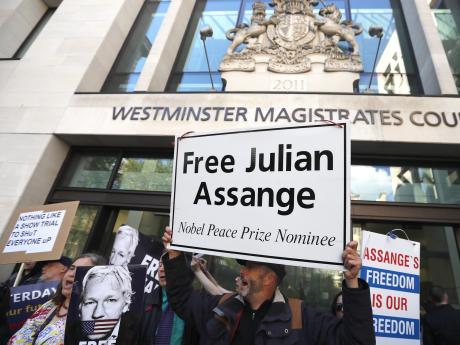 Protestors demonstrate at the entrance of Westminster Magistrates Court in London, Thursday, May 2, 2019, where WikiLeaks founder Julian Assange is expected to appear by video link from prison. (AP Photo/Frank Augstein)

LONDON (AP) — WikiLeaks founder Julian Assange told a London court on Thursday that he wouldn’t agree to be extradited to the United States, where he is accused of conspiring to hack into a Pentagon computer.

Assange, appearing by video link from a London prison, said he wouldn’t “surrender myself for extradition for doing journalism that has won many awards and protected many people.”

Judge Michael Snow said it would likely be “many months” before a full hearing was held on the substance of the U.S. extradition case.

The judge set a procedural hearing for May 30, with a substantive hearing to follow on June 12.

The 47-year-old Australian was sentenced Wednesday to 50 weeks in prison in the U.K. for jumping bail in 2012 and holing up in the Ecuadorian Embassy in London.

At the time, he was facing extradition to Sweden for questioning over rape and sexual assault allegations made by two women.

Assange says he sought asylum because he feared being sent to the U.S. to face charges related to WikiLeaks’ publication of classified U.S. military documents.