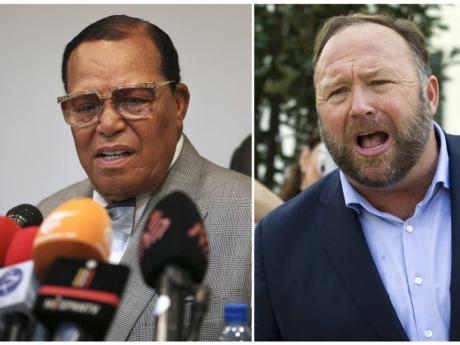 This combination of file photo shows minister Louis Farrakhan, the leader of the Nation of Islam, in Tehran, Iran, on November 8, 2018 (left), and conspiracy theorist Alex Jones in Washington on September 5, 2018. Facebook has banned Louis Farrakhan, Alex Jones and others from its platform and from Instagram saying they violated its ban against hate and violence. (AP Photo)

SAN FRANCISCO (AP) — After years of pressure to crack down on hate and bigotry, Facebook has banned Louis Farrakhan, Alex Jones and other extremists, saying they violated its ban on “dangerous individuals.”

The latest bans apply to both Facebook’s main service and to Instagram and extend to fan pages and other related accounts.

Decried as censorship by several of those who got the ax, the move signals a renewed effort by the social media giant to remove people and groups promoting objectionable material such as hate, racism and anti-Semitism.

Removing some of the best-known figures of the U.S. political extreme takes away an important virtual megaphone that Facebook has provided the likes of Jones, Yiannopoulos and others over the years.

But it does not address what might be done with lesser known figures and those who stay on the margins of what Facebook’s policies allow.

Critics praised the move but said there is more to be done on both Facebook and Instagram.

“We know that there are still white supremacists and other extremist figures who are actively using both platforms to spread their hatred and bigotry,” said Keegan Hankes, senior research analyst for the Southern Poverty Law Center, which tracks hate groups in the U.S.