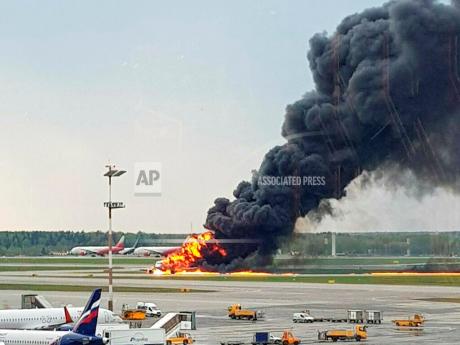 In this image provided by Riccardo Dalla Francesca shows smoke rises from a fire on a plane at Moscow's Sheremetyevo airport today.

MOSCOW (AP) — The Latest on an airplane that landed in flames at a Moscow airport (all times local):

Russia's Investigative Committee says 13 people have died in a fire on an airplane that made an emergency landing at Moscow's Sheremetyevo Airport.

The airport said the Sukhoi SSJ100 operated by Russian flagship carrier Aeroflot caught fire when it made a hard emergency landing on Sunday.

Video of the landing showed flames and smoke billowing from the rear of the plane.

The airport said the aircraft had 73 passengers and five crew members on board.

Investigators and the airport said the plane had taken off for the northern city of Murmansk, but turned back because of unspecified problems.

Russia's flagship airline Aeroflot says a passenger plane that was in flames after an emergency landing at Moscow's Sheremetyevo Airport had been forced to turn back after takeoff because of technical problems.

Aeroflot said in a brief statement Sunday the engines of the Sukhoi SSJ100 were burning after the aircraft landed, but the sequence of events before and after the fire started was not clear.

Some Russian news reports cited sources as saying the plane headed back to the airport after a fire was detected in flight. Others said the plane made a hard landing that could have caused the engines to catch fire.

The Aeroflot statement did not specify what caused the plane to return to Sheremetyevo Airport.

Russian officials say one person died and at least four were injured after a plane belonging to flagship carrier Aeroflot made an emergency landing in Moscow with flames and smoke billowing from its rear section.

Video on Russian news channel Rossiya-24 showed passengers leaping from the plane Sunday evening onto an inflatable slide from the front of the aircraft and staggering across tarmac and grass of Sheremetyevo Airport.

Russian news agencies cited sources saying the plane, a Sukhoi SSJ-100 regional jet, had taken off for the northern city of Murmansk but returned when fire broke out. The agencies reported the plane had 78 people on board.

Russia's Investigative Committee said one person was confirmed dead and four injured. But the Emergencies Ministry said six people had been hospitalised.

A plane belonging to Russian national carrier Aeroflot has landed in flames at Moscow's Sheremetyevo airport and unconfirmed reports say at least five people have been injured.

Russian news agencies cited unspecified sources as saying the plane had taken off for the northern city of Murmansk, but a fire broke out while it was in the air and it returned to Sheremetyevo.

The reports say there were 78 people aboard the plane.