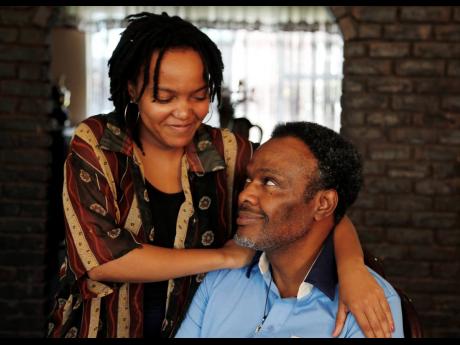 The Associated Press
In this April 27 photo, Abetse Mashigo and her father Thamsanqa pose for a photograph in their home near Johannesburg.

At 24, Abetse Mashigo was born a year after South Africa’s brutal apartheid system was dismantled. Yet she still feels frustrated by what she sees as continued economic inequality for its people.

And that will be on her mind as she and others vote May 8 to elect a president and Parliament.

“South Africa is a great country, but it has many shortfalls,” Mashigo said, flicking her dreadlocks back with a flourish. “Seeing the spectrum of both wealthy and poor, it’s a constant everyday struggle.”

Many of the country’s young voters never directly experienced apartheid’s racial oppression and segregation that was ended in 1994 under South Africa’s first black president, Nelson Mandela, and his African National Congress (ANC). But they and others say they want to see more drastic change, and leaders of opposition parties are hoping to win their support.

Mashigo said she is angered by apartheid’s legacy, which keeps many blacks in poverty. She said she’s impatient for change, and that’s why she backs the Economic Freedom Fighters (EFF), one of the three main parties among dozens vying for power in the election.

“I’m part of the Red Sea,” she said, jokingly referring to the bright red clothing worn by supporters of the opposition party. “I like the EFF because it is radical and different. It’s rebellious, and I like that.”

The party has pledged to seize white-owned land without compensation and nationalise mines and banks.

Mashigo’s 59-year-old father, Thamsanqa, watches with pride as his daughter voices her outspoken opinions. He shares many of her beliefs but has a more cautious approach, saying he is still undecided which party will get his vote.

Many older South Africans among the 26 million eligible voters still support for the ANC, which has governed for a quarter-century. But they also say they are disgusted by widespread corruption blamed on the party. President Cyril Ramaphosa has pledged to root out corruption in the country. A former trade union representative, he came to power in February 2018 after Jacob Zuma resigned amid mounting scandals.

The elections are taking place amid growing pessimism. About 64 per cent of South Africans are dissatisfied with the country’s democracy, an increase from 34 per cent who described themselves as unhappy in 2013, according to a Pew Research poll released Friday.

“I have voted in every election (since blacks could vote) and I’m not going to miss this one,” Thamsanqa Mashigo said. “I’ve never had doubts in my mind about who to vote for, but this time ... I’m still deciding. ... There is doubt in my mind.”

Mashigo, who works in information technology, said he is now disappointed with the ANC.

“The gap between black and white has just grown bigger and bigger. And by 25 years, I expect it to be much better. The gap should have closed, not totally, but at least be on the right track,” he said, adding that the ANC should have focused on education and healthcare.