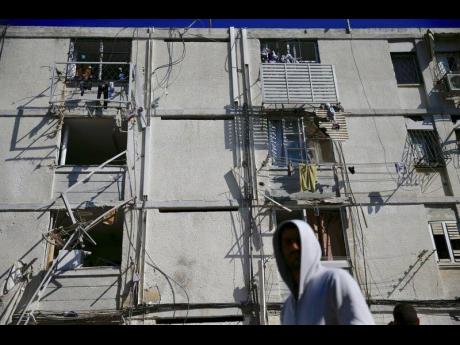 Damage is seen in a residential area after it was hit a by a rocket fired from Gaza in the southern Israeli city of Ashkelon, yesterday. AP

Gaza militants on Sunday intensified a wave of rocket fire into southern Israel, striking towns and cities and killing at least three people in one of the bloodiest rounds of fighting since the 2014 war. At least nine Palestinians, including a pregnant woman and her 14-month-old niece, have also been killed.

Israeli forces struck dozens of targets throughout Gaza, including militant sites that the military said were concealed in homes or residential areas. The army also moved armoured units towards Gaza as the sides headed closer to all-out war.

Israel and Hamas are bitter enemies that have fought three wars since the Islamic militant group seized control of Gaza in 2007, as well as numerous smaller flare-ups, most recently in late March.

These flare-ups have become increasingly frequent in recent years, ending in informal Egyptian-mediated truces in which Israel pledges to ease a crippling blockade on Gaza imposed after the Hamas takeover, while the militants promise to halt rocket fire.

Latest Round Of Violence

As with previous rounds of fighting, the latest violence began late last week amid Palestinian accusations that Israel was not moving quickly enough to ease the blockade.

In Sunday’s fighting, Moshe Agadi, a 58-year-old Israeli father of four, was struck in the chest by shrapnel in a residential courtyard. The Barzilai Medical Center said a 49-year-old man was killed when a rocket hit an Ashkelon factory, while a second man was killed when his vehicle was hit by a projectile near Yad Mordechai, a small border community.

By late afternoon, the Israeli military said militants had fired over 600 rockets into Israel, and that Israeli forces had launched some 260 airstrikes against militant targets in Gaza.

The other dead included a pregnant woman and her niece, who were killed in what the officials said was an Israeli airstrike. The Israeli military denied involvement, saying the woman and baby were killed by a misfired Palestinian rocket. There was no way to reconcile the conflicting accounts.