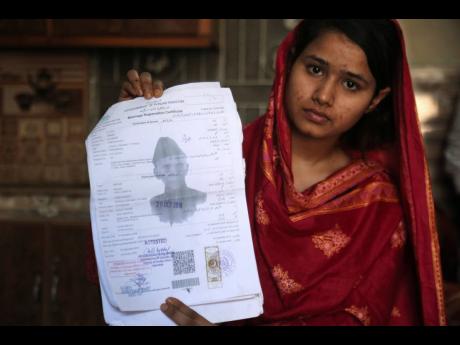 The Associated Press
In this April 14, 2019 photo, Mahek Liaqat, who married a Chinese national, shows her marriage certificate in Gujranwala, Pakistan. Poor Pakistani Christian girls are being lured into marriages with Chinese men, whom they are told are Christian and wealthy only to end up trapped in China, married to men who are neither Christian nor well-to-do, and some are unable to return home. (AP Photo/K.M. Chaudary)

Muqadas Ashraf was just 16 when her parents married her off to a Chinese man who had come to Pakistan looking for a bride. Less than five months later, Muqadas is back in her home country, pregnant and seeking a divorce from a husband she says was abusive.

She is one of hundreds of poor Christian girls who have been trafficked to China in a market for brides that has swiftly grown in Pakistan since late last year, activists say. Brokers are aggressively seeking out girls for Chinese men, sometimes even cruising outside churches to ask for potential brides. They are being helped by Christian clerics paid to target impoverished parents in their congregation with promises of wealth in exchange for their daughters.

Parents receive several thousand dollars and are told that their new sons-in-law are wealthy Christian converts. The grooms turn out to be neither, according to several brides, their parents, an activist, pastors and government officials, all of whom spoke to The Associated Press. Once in China, the girls — most often married against their will — can find themselves isolated in remote rural regions, vulnerable to abuse, unable to communicate and reliant on a translation app even for a glass of water.

“This is human smuggling,” said Ijaz Alam Augustine, the human rights and minorities minister in Pakistan’s Punjab province, in an interview with the AP. “Greed is really responsible for these marriages ... I have met with some of these girls and they are very poor.”

Augustine accused the Chinese government and its embassy in Pakistan of turning a blind eye to the practice by unquestioningly issuing visas and documents. The Chinese Ministry of Foreign Affairs denied that, saying China has zero tolerance for illegal transnational marriage agencies.

Human Rights Watch called on China and Pakistan to take action to end bride trafficking, warning in an April 26 statement of “increasing evidence that Pakistani women and girls are at risk of sexual slavery in China”.

The Chinese embassy said last month that China is cooperating with Pakistan to crack down on unlawful matchmaking centres, saying “both Chinese and Pakistani youths are victims of these illegal agents”.