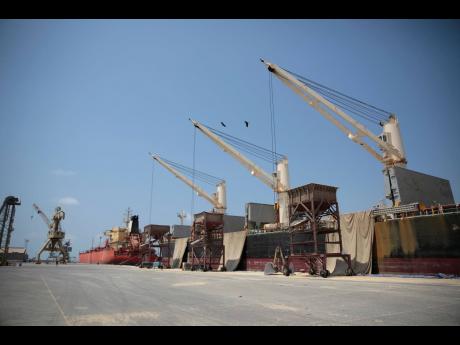 The Associated Press
This September 29, 2018 file photo shows idle cargo and oil tanker ships at the port of Hodeida, Yemen.

Yemen’s Houthi rebels on Saturday began a long-delayed withdrawal of forces from the port facility in the key city of Hodeida, the group said, following the terms of a December cease-fire aimed at alleviating the world’s worst humanitarian crisis.

Mohammed Ali al-Houthi, the head of the rebels’ Supreme Revolutionary Committee, said the pullout from Hodeida, as well as the two smaller ports of Salif and Ras Issa, started at 10 a.m. (0700 GMT).

The country’s bloody civil war erupted in September 2014, when Shi’ite Houthi rebels swept into the capital city of Sanaa. A Saudi-led coalition soon intervened to back the government of President Abed Rabbo Mansour Hadi. The cease-fire in Hodeida, which halted months of heavy fighting in the city, called for the mutual withdrawal of rebel and government forces from the city’s port, and the two smaller ports in the province.

Sadek Dawad, a government negotiator, said he welcomed the “first step of the first phase of redeployment” of rebel forces in the area. He urged the UN to verify and watch the pullout. He also called for the removal of land mines laid by the Houthis.

The information minister of Yemen’s internationally recognised government, Moammer al-Iryani, warned of “attempts by the (Houthi) Militia to mislead” the UN Security Council before an expected meeting next week.

“Any unilateral spread not allowing the principle of control and joint verification of the implementation of the terms of the Sweden agreement is dodging and cannot be accepted,” he said.